Leopard Tries To Shake Monkey Down From Tree In Incredible Video 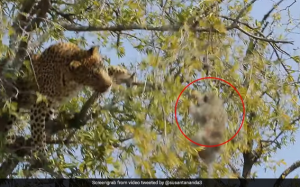 This is one captivating wild life incident you would want to watch over and over again. It shows what relatively weaker animals surfer in the hands of stronger predators in the wild life environment.

This video has been widely shared and viewed by many social media users. It shows a leopard trying to shake a monkey down from a tree. The video was posted this morning on Twitter by Indian Forest Service officer Susanta Nanda, who said that such a scene has been “rarely seen” in nature. This is an old video but still looks new and captivating to many seeing it for the first time.

In the video, the big cat climbs the tree where the monkey was resting. It then uses its paw to shake the tree branch repeatedly even as the monkey tries to cling on for life.

The video was filmed in South Africa and shared on YouTube in 2013. Recorded by Gary Parker in the country’s Sabi Sands Game Reserve, it was posted online by an environmental blog called Ranger Diaries. According to them, the leopard managed to isolate a vervet monkey – a species native to Africa – and then spent hours trying to catch it. In this 18-second clip of the incident, the big cat was seen trying to shake it from its perch.

“Size, strength and reputations takes a back seat many times in nature..” wrote Mr Nanda while re-posting the video on the microblogging platform. “Rarely seen, leopard trying to shake the monkey from tree for food.”

Watch the incredible footage below:

Size, strength & reputations takes a back seat many times in Nature..

Rarely seen, leopard trying to shake the monkey from tree for food. Monkey holds on🙏

It’s better than monkey defending itself from king cobra that I had posted earlier. pic.twitter.com/EjyMshPNwg

Saxon is a prolific writer with passion for the unusual. I believe the bizarre world is always exciting so keeping you up to date with such stories is my pleasure
Previous Frillback Pigeons, beautiful pigeon breed with naturally curly feathers (Video)
Next Armed robber steal household items and security dog guarding the house he robbed