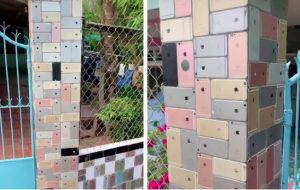 There some people who dream of having iPhone 6 as special gift from a friend. Though this is definitely not the newest Apple handset, it is still a sophisticated top quality phone which some people are desiring to have. But do you know what? Someone is already using it to decorate his fence in place of tiles. Or so this story seems.

A viral TikTok video of what looks like a concrete fence decorated with hundreds of iphone 6 smartphones has been causing sensation among the online community in Asia. It has also sparked a heated debate about its authenticity. Though no one knows exactly where this house is located as the video did not give out any traces of that, social media users are still stunned by the choice of iPhone 6 as decorative tile for house fence. 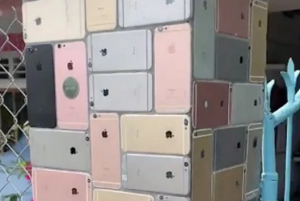 The TikTok video posted by Vietnamese user @minhhienapple last week shows the fence of a rural home decorated with hundreds of iPhones and this video has so far been viewed over 1.7 million times.

Apparently, the owner of the house displayed in the viral TikTok clip decided that iPhone 6 smartphones were better than regular stone or ceramic decorative tiles, so he used several hundreds of them to beautify their concrete fence. Some of the top comments on the video claimed that these were just decorative stickers, and while that’s certainly a possibility, some sections of the video show at least a few real iPhones.

The flamboyant iPhone 6 fence makes the house look like a tourist attraction in the middle of what looks like a rural community in Vietnam.

The house will definitely trend for quite a while especially leaving iPhone 6 users who know the value of the phone wondering whether it is possible for some to stick that on the wall as decorative material.

Saxon is a prolific writer with passion for the unusual. I believe the bizarre world is always exciting so keeping you up to date with such stories is my pleasure
Previous This Toy Rolls Royce SUV Car Costs N12 Million, has luxury accessories like the real life version
Next Frillback Pigeons, beautiful pigeon breed with naturally curly feathers (Video)