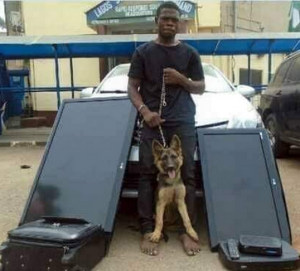 A Nigerian man who stole household items alongside a security dog has been arrested by the Lagos state police.

Twitter user @peter_ameh who shared a photo of the suspect, said the robbery incident took place in Magodo, Lagos, Nigeria.

Just to cut a long story short, The guy broke into a House in Magodo, Lagos & stole two Television sets, a decoder & other items. As if dat was not enough, he stole the Security Dog too 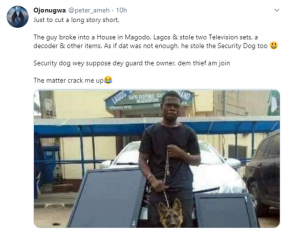 Saxon is a prolific writer with passion for the unusual. I believe the bizarre world is always exciting so keeping you up to date with such stories is my pleasure
Previous Leopard Tries To Shake Monkey Down From Tree In Incredible Video
Next Russian influencer, Marina Balmasheva pregnant with her stepson’s child after ditching his dad