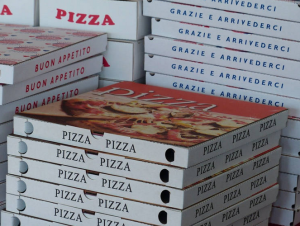 Sounds like fun to always receive free pizzas but not when it has been coming for 10 years and the worst part, from an unknown source.

A 65-year-old man in Flanders says he is “losing sleep” because he has been receiving pizzas he never ordered for nearly a decade, sometimes several times a day.

Over the past nine years, pizzas he never asked for have been delivered to Jean Van Landeghem’s home in Turnhout, in the Antwerp province. “It started nine years ago,” Van Landeghem told Het Laatste Nieuws. “Suddenly, a pizza delivery man handed me a whole load of pizzas. But I hadn’t ordered anything,” he added.

At first, he thought it was a simple mistake in the delivery address, but orders of pizzas, kebabs, pittas and other food that he never ordered kept flowing in.

“It can be on a weekday or during weekends, and at any time of day. [The orders come from] delivery services in Turnhout, but also from the surrounding area. I have even had orders delivered to me at 2:00 AM,” Van Landeghem said.

“I cannot sleep anymore. I start shaking every time I hear a scooter on the street. I dread that someone will come to drop off hot pizzas yet another time,” he added.

One day in January 2019, Van Landeghem said, ten different delivery men showed up at his house, one of which had 14 pizzas with him.

“I have always refused the deliveries, so I have never paid for anything,” he said, adding that the harassment is not only annoying for him, but also for restaurants.

“It costs them money and they have to throw the food away. On the day that ten deliveries showed up, I did the math: it cost €450,” Van Landeghem said.

“I only buy frozen pizzas from Colruyt or Aldi. I have never asked for them to be delivered to my house,” he added.

“A friend of mine who lives in Herenthout is going through exactly the same thing as I am. She has been receiving pizza she has not ordered for nine years, too,” Van Landeghem said.

“Sometimes we both get them on the same day. When that happens, we warn each other to expect a delivery,” he said, adding that it is likely someone they both know.

He reported the false deliveries to the police several times, he said, but he still has no idea who the person harassing him is. “I cannot take it anymore. When I find out whoever has been bothering me for the past nine years, it will not be their best day,” he said.

Saxon is a prolific writer with passion for the unusual. I believe the bizarre world is always exciting so keeping you up to date with such stories is my pleasure
Previous Russian influencer, Marina Balmasheva pregnant with her stepson’s child after ditching his dad
Next Toilet paper that lets you use poo to paint creative art work