Russian influencer, Marina Balmasheva pregnant with her stepson’s child after ditching his dad 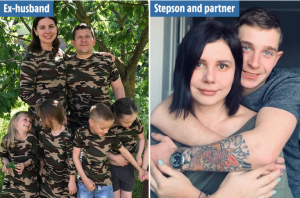 Popular Russian influencer, Marina Balmasheva has announced that she is pregnant with her 20-year-old stepson’s child following a split from his 45-year-old father, Alexey who she was married to for 10 years.

In a video she shared on Instagram to her 411,000 followers showing the moment she and 20-year-old student Vladimir ‘Vova’ Shavyrin found out they are expecting a baby, Ms Balmasheva stated that she was “tired of hiding”. 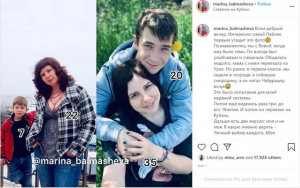 “I know that the deadline is still small. That ultrasound with the heart is yet to come. But I want you to know that. Everything is possible in this world. We are 4 weeks and yes. That is why we decided to get married.”

The couple’s relationship made headlines after Ms Balmasheva posted a throwback photo of her with Vova — when he was aged seven and she was still married to his father.

Commenting on his son’s relationship with his ex-wife, Alexey said;

“She seduced my son, Vova is not capable of that. He had not had a girlfriend before her.

“They were not shy to have sex while I was at home. I would have forgiven her cheating, if it wasn’t my son. She was running to my son’s bed from our bedroom when I was sleeping.

“After that she was coming back and lying in bed with me as if nothing had happened. When I found out about everything, I demanded a divorce.”

Thousands of her followers have expressed their disgust at the relationship. A follower wrote “What shocks me most is that this boy grew up before her very eyes.”

Another follower wrote “This is a prank right? You are teasing?”

Saxon is a prolific writer with passion for the unusual. I believe the bizarre world is always exciting so keeping you up to date with such stories is my pleasure
Previous Armed robber steal household items and security dog guarding the house he robbed
Next Belgian man has been receiving pizzas he never ordered for 10 years