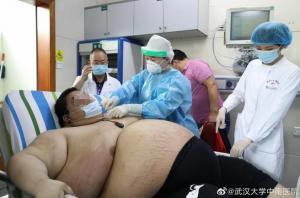 A 26-year-old Chinese became an internet sensation for reasons he may not be entirely happy with.

The man identified as Zhou, to protect his privacy, was recently labeled Wuhan’s fattest person after gaining a whopping 100 kilograms during the city’s five-month lockdown.

Before the coronavirus hit Wuhan city, prompting the authorities to impose a strict lockdown, Zhou was making efforts to check his weight.

He worked at a local cafe and lead a relatively normal lifestyle until he started spending most of his time indoor due to the lockdown restrictions.

It became difficult to burn off any calories which means he started gaining weight while at hme. Before he knew what was happening, he had blown to 616 pounds (280 kilograms), over 200 pounds more than he weighed before the Covid-19 epidemic. 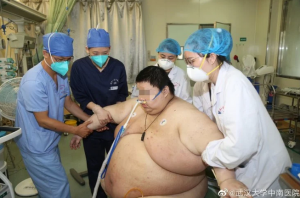 Zhou’s shocking case was revealed last week, by one of the doctors who treated him at the Wuhan University Central South Hospital, a long with photos of his admission, on June 1st. He reportedly told doctors that he had not left his home since before the lockdown, in January, and that his weight had made it impossible for him to sleep comfortably anymore, which was why he finally asked for medical assistance.

“Doctor, I haven’t closed my eyes for 48 hours. It’s so uncomfortable. Can you help me?” Zhou allegedly asked Dr Li Zhen, the deputy director of the Obesity and Metabolic Surgery Center of the Central South Hospital of Wuhan University. By that point, he had already contacted other doctors, who had refused to assist him because of his extreme weight.

After a team of paramedics struggled to get Zhou out of his home and into an ambulance, he was admitted in the ICU, where initial tests revealed various symptoms, such as heart failure and respiratory dysfunction. Unfortunately, his size made it hard for doctors to conduct other needed tests, like blood pressure and EEG. For 10 days, doctors tried to stabilize him, and on June 11 he was declared stable and out of immediate danger.

Dr. Li Zhen said that the patient’s obesity was caused by genetic factors and endocrine abnormalities exacerbated by his inactivity and increased calorie intake during Wuhan’s five-month lockdown. He had his team are hopeful that Zhou will be able to lose at least 50 pounds so he can safely undergo a  gastric bypass or stomach reduction surgery to help him shed most of the excess weight.

“I can only hope that by adjusting diet and rest and other methods, it (body weight) can reduce more than 50 pounds in three months so that the risk of surgery will be greatly reduced,” the doctor said.

Saxon is a prolific writer with passion for the unusual. I believe the bizarre world is always exciting so keeping you up to date with such stories is my pleasure
Previous Monkeys attack health worker, steal and chew test kit containing blood sample of patients who tested positive for the coronavirus (viral video)
Next Video of twerking grandpa goes viral, no way you can watch this only once!