Home / Asia / Robbers apologize to crying man after stealing from him, console him and return his valuables in viral video

Robbers apologize to crying man after stealing from him, console him and return his valuables in viral video 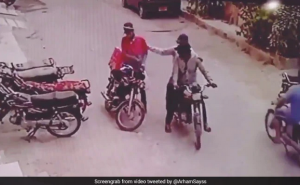 You hardly find what you could describe as kindhearted robbers around. But the internet is buzzing with a video of two robbers who showed unbelievable kindness to a young man who broke down in tears as they robbed him. Here’s what happened.

A pair of robbers in Pakistan apparently had a change of heart after their victim broke down in tears. A video that is being widely circulated online shows the robbers returning the valuables they had stolen from a food delivery man and even consoling him with a hug as he broke down after the theft.

According to Geo News, the bizarre but heartwarming incident occurred in Karachi – the capital of the Pakistani province of Sindh. CCTV footage that has gone viral shows the food delivery man – an employee of a popular food delivery platform in the country – walking up to his parked bike after making a delivery.

The footage shows two robbers pulling up next to him on their own bike. The robbers first tried to intimidate their target, reports Gulf News. While one got off the bike and tried to wrest his valuables from him, the other was seen keeping watch during the mugging attempt.

However, the delivery man reportedly broke down during the robbery attempt, heartbroken at the loss of his hard-earned money. Seeing this, the robbers had a change of heart and were filmed returning his things to him instead of fleeing. They were even seen hugging him and shaking his hand in an attempt to console him before driving away.

The video of this uniquely unsuccessful robbery has gone viral on social media since it emerged a few days ago, collecting thousands of views and comments. Watch it below:

“A small act of kindness has moved us to tears. This tells a lot about the kind of toxic environment we live in. Little things make a big difference,” wrote one person in the comments section.

“This gives me hope for humanity,” another wrote.

Police officials have confirmed that the incident occurred in Karachi, according to Geo News. They are yet to identify in which police station’s jurisdiction the crime occurred.

Saxon is a prolific writer with passion for the unusual. I believe the bizarre world is always exciting so keeping you up to date with such stories is my pleasure
Previous Video of twerking grandpa goes viral, no way you can watch this only once!
Next Traumatized man sues girlfriend for $160,000 damages after allegedly catching mouth disease from kissing her on first date