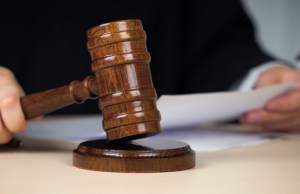 A man who insists his girl friend never informed him that she has mouth infected in not taking his experiences after kissing the girl lightly at all. The man is traumatized that he is battling a viral infection and insists his girlfriend must pay for the ugly experience. He has started one of the most bizarre law suits you can think of.

The 45-year-old Englishman sued the woman he went on a date with for refusing to inform him that she suffered from cold sores and thus knowingly infecting him with the herpes virus when he kissed her.

Martin Ashley Conway, from London, in the UK, claims he got traumatized by the aftermath of a romantic date he went on last year. After meeting a woman who he knew as Jovanna Lovelace on dating website Meetup.com, Conway claims they went on a romantic date which also included a kiss.

The kiss experience turned out to be the beginning of a nightmare for Conway in a manner that he is not ready to let the woman go scot free.

Conway had realized days after the night out with the woman, he started developing flu-like symptoms and mouth ulcers which made eating difficult and painful. After being referred to a hospital, the London-based fitness instructor was diagnosed with “the lifelong virus of herpes simplex virus” and prescribed medication.

A few days after the initial diagnosis, Conway suffered a panic attack and collapsed in his home after seeing more mouth ulcers developing, despite him taking the prescribed medication. He claims that the condition caused him to fall into a depression which had him endure “a few weeks of not leaving my property except for medical appointments.”

Conway claims that contacting the herpes simplex virus has been a traumatizing experience in more ways than one.

He said the stigma and pain of having the virus alone have serious psychological implications on a person he says, plus the condition has left him unable to go cycling because he worries that the sweat and stress might cause a flare-up. He added that the virus left him vulnerable to a “rare but devastating” condition called sporadic encephalitis.

Somehow Conway believes that the person who gave him this “virus for life” is the woman he went out with and she should be held responsible for failing to inform him about being a carrier before kissing him. He then decided to sued her for a whopping £136,328. 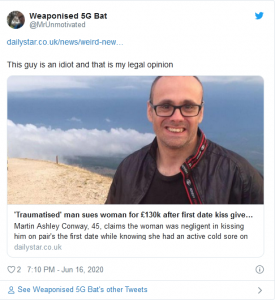 “I was upset, angry and very confused. I wanted justice and it was then I decided I wanted to take legal action against the respondent for the illness she brought upon me,” Martin Ashley Conway said. “As a herpetic, the respondent had a moral and ethical and legal duty to warn me of the risks that I would be exposed to, considering the contagious nature of the virus and herpes being a ‘virus for life’. I did not freely enter into the risks relating to the injury or any type of contagion. I was kissed before I was informed of any cold sore.”

“The respondent owed me a duty of care…(and) a harm was reasonably foreseeable,” Conway added. “It is fair, just and reasonable for the court to impose a duty of care upon the respondent, due to the risk that was negligently being taken with my health, which was reasonably foreseeable which led to three weeks of severe acute symptoms, leading to emotional, physical and financial distress.”

The over £130,000 he is asking as compensation includes over £10,000 for fortnightly therapy sessions until the age of 79, as well as lost earnings while he was ill and income protection insurance in case of future herpes flare-ups.

Conway’s date has denied having any liability, and referred to the lawsuit “frivolous and vexatious”. She dismisses his version of events as false. She says there is no accuracy in much of his account of their relationship. The case which originally reached court in February has been adjourned till for further hearing later this year.

Saxon is a prolific writer with passion for the unusual. I believe the bizarre world is always exciting so keeping you up to date with such stories is my pleasure
Previous Robbers apologize to crying man after stealing from him, console him and return his valuables in viral video
Next Doctor rapes six months pregnant woman on antenatal visit