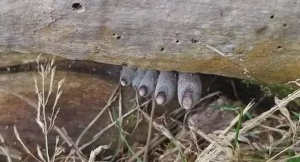 There are strange plants across the world but this particular one is not only creepy and scary but unbelievably wacky. I bet if you see this while a lone in a thick forest you’ll definitely sprint off.

A photo of what looks like a creepy zombie foot peeking from under a log is buzzing the internet, leaving people wondering what it really is.

The picture shared online by Indian Forest Service officer Susanta Nanda looks like it was taken from a Zombie movie or from the grave yard of the living dead. But it was not. It is actually a real life ‘creaure’. Nanda actually challenged his followers to identify the animal, which was just as misleading as the photos. It is not actually an animal but a fungus aptly named “Dead Man’s Fingers”. Yes, a plant. 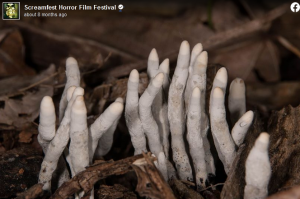 Xylaria polymorpha, commonly known as Dead Man’s Fingers, is a type of fungus that, like its name suggests, looks a lot like the grey fingers of a dead person. It’s true that in this particular case the fungus actually passed as human toes, which in my opinion only makes it creepier.

Commonly found in forest and woodland areas, this eerie-looking fungus grows from the bases of rotting or injured tree stumps and decaying wood and takes its common name from its elongated upright stromata poking from the ground like fingers. However, despite its morbid appearance, this fungus is innocuous to humans.

While Xylaria polymorpha is indigenous to the regions of Nepal, Bhutan and Northeastern India, it can also be found in regions of the United States, including the Rocky Mountains. This creepy-looking plant has different colours which strangely change as it grows. The colours vary from white to blue and black throughout its life cycle. The fingers are white at first, then turn pale blue as they grow, and finally turn black before drying up. 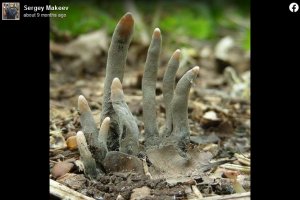 Creepy and scary as this plant is, you won’t believe that some people still cook and eat them even though they are not technically edible. Guess where they are eaten by villagers; You probably guessed right – China.

Blue Dead Man’s Fingers are cooked and eaten in parts of China. As they darken, they become harder to digest and are only used as decoration.

As a wood decaying fungus, Dead Man’s Fingers also has a practical use in the making of violins. According to James Murray, they are used to increase the acoustic properties of wood used to make violins. The wood’s density is decreased by controlling the degree of decay, before the fungus is killed with ethylene oxide to prevent further wood rot.

This is one of the creepiest plants you wouldn’t want to see in your garden.

Saxon is a prolific writer with passion for the unusual. I believe the bizarre world is always exciting so keeping you up to date with such stories is my pleasure
Previous Doctor rapes six months pregnant woman on antenatal visit
Next See China’s Board Shoe Racing Sport, a weird traditional game