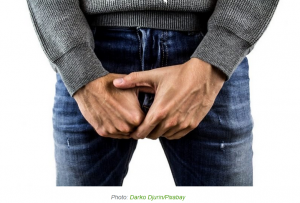 A 40-year-old man in China is currently in trouble after reportedly suffering three bladder tears after drinking ten beers and then holding pee in for a shocking 18 hours.

The man, referred to only as Mr. Hu, had reportedly consumed 10 beers during a night on the town, before coming home and crashing into an inebriated sleep. He did not wake up to urinate after drinking that many beers. He just went to sleep and didn’t empty his bladder once for a total of 18 hours, which doctors later explained could be tied to alcohol’s capacity to suppress the nervous system. It is possible that Hu just didn’t feel the sensation of needing to empty his bladder while he slept. That all changed when he woke up, though.

In a report published on June 18, doctors at Zhuji People’s Hospital in Zhejiang wrote that the patient had said that when he woke up from his sleep, he started experience a sharp pain in his abdomen. When he was brought in by an ambulance, he was in so much pain that he couldn’t even lie down. An emergency MRI quickly revealed the source of this excruciating pain – the man’s bladder had ruptured in three places.

One of the discovered tears had opened up towards his abdominal cavity and had caused one of his intestines to enter the bladder. This would have led to tissue death if left unfixed, so Hu was prepared for emergency surgery and a team of surgeons managed to repair the bladder, preventing other complications. The 40-year-old is now in stable condition.

Doctors warned that even though Mr. Hu’s case is extremely rare, it could theoretically happen to anyone. A human bladder is flexible and can increase in size as fluids are consumed, but has a limited capacity of around 450 to 500 millilitres, so it’s recommended to pee regularly, especially when consuming lots of fluids.

Strangely enough, alcohol makes you need to pee even more often than if you were drinking the same quantity of water, by suppressing the hormones that signal the kidneys to stop making urine. However, in Hu’s case, the alcohol seems to have also suppressed the nervous system from conveying the need to empty the bladder to the brain.

Saxon is a prolific writer with passion for the unusual. I believe the bizarre world is always exciting so keeping you up to date with such stories is my pleasure
Previous See China’s Board Shoe Racing Sport, a weird traditional game
Next Watch as Baby Elephant Pushes His Friend Into Water in Rare Prank (MUST WATCH)