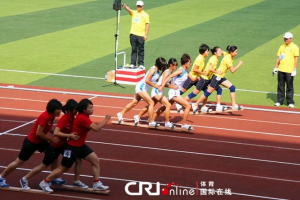 There are several traditional sports activities found in different parts of the world and unique to specific communities or even countries. These are activities that sometimes play tourism roles as people come from different parts of the world to watch such tournaments. Some of these games are so wacky that you sometimes wonder how those who engage in them manage to do so. One of such bizarre traditional sports is the Board Shoe racing in China. It is unique to the Zhuang people of China.

Board shoe racing is the traditional sport of the Zhuang people of China’s Gunaxi province, a unique discipline that has three people sharing the same “shoes”, which requires perfect coordination and concentration.

This sport began among the Ming Dynasty, when legend has it that a famous heroine of the Xhuang people used it as a way to train soldiers against invading Japanese pirates. The legendary Mrs. Wa used long pieces of wood to teach the men to march together in perfect synchronization, which greatly improved their combat qualities and boosted their fighting spirit, helping them repel the invaders. The traditional sport has been passed on from generation to generation since then.

This bizarre sport involves three teammates running on the same pair of shoes, which basically consist of two wooden boards and some leather straps to fasten the feet, reports Oddity Central. The boards are one-meter-long, 9cm-wide and 3cm-thick, and using them as shoes for a three-member team requires expert coordination. If one of the three pushes too hard or falls behind, they can cause the entire trio to topple over each other. 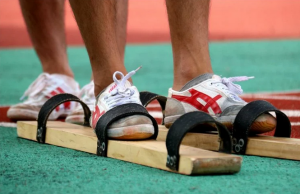 In 2005, the National Civil Affairs Commission approved board shoe racing project as an official event at the annual National Minority Traditional Sports Games. It is practiced by both men and women, particularly from the Zhuang people.

“Board shoe racing is a true team sport, and coordination is the most important requirement,” Liu Jianxin, head coach of the Henan board shoe racing team, told Henan Daily. “In addition to improving physical fitness and speed training, it is more about enhancing the team members’ tacit cooperation to the highest it can be.”

Saxon is a prolific writer with passion for the unusual. I believe the bizarre world is always exciting so keeping you up to date with such stories is my pleasure
Previous Creepy plant that looks like Zombie toes shocks the internet (photos)
Next Man’s Bladder Explodes For Holding Pee in for 18 Hours After Drinking Excess Beer