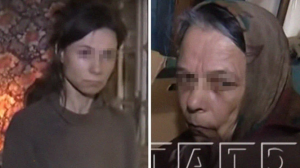 Mothers love their daughters naturally but when love is shown in a bizarre way, it is likely going to attract attention like this story is doing presently.

Russian media recently reported the shocking case of a 42-year-old woman who had not set foot outside her family home for 26 years, despite being in perfect health, because he mother didn’t allow it.

It was only this month that 42-year-old Nadezhda Bushueva left her mother’s house in the village of Arefinsky, in western Russia, since she was 16. The reason she decided to talk a walk into the village was because her mother, Tatyana, had become ill and needed to be hospitalized. For the first time in 26 years she didn’t have to listen to her mother, who reportedly kept her isolated for all these years to “protect her from the dangers of the outside world”. Nadezhda had reportedly not washed her hair in 12 years, as evidenced by the giant clump on her head, and hadn’t had a change of clothes in even longer. Despite all this, she allegedly said she doesn’t need any help…

According to the women’s neighbors, Tayana had always been very protective of her daughter, but things really got out of control when the woman retired. Nadezhda was in 8th grade when her mother started forbidding her from going out with other teenagers in the village, and in a couple of years the two had become complete recluses. Nadezhda didn’t go to school anymore, and her mother rejected anyone who tried to interfere, telling them that they were fine and that they should mind their own business.

How exactly Tatyana got her daughter to accept this isolated lifestyle is still a puzzle which no one has been able to crack. People generally think that the girl slowly got used to how things were and simply adapted to the new normal. After a while, villagers stopped trying to convince her mother to give Nadezhda more freedom too, and everyone just went on with their lives.

But things changed only earlier this month, when Tatyana got sick and needed to be hospitalized that Nadezhda ventured out of her home for the first time in 26 years. Everyone was shocked when they saw her, especially because she looked like she hadn’t bathed in a while, which turned out to be an accurate assumption. After villagers brought her to the head of the local council, Vasily Tovarnov, the woman revealed that she hadn’t washed her hair in 12 years, hadn’t changed her clothes in even longer than that, had been living on cat food for years and had been sharing a bed with her mother and their cats, some of which were dead…

“So what if there are dead cats on the couch? Maybe I’ll die soon here on this couch as well. My life is worse than that of a cat. A cat has more rights. I am not alive, I don’t even exist. I’m a walking dead,” Nadezhda Bushueva allegedly said.

Despite the above statement, and her apparent desire to “find work and get a passport”, Nadezhda didn’t seem eager to change her lifestyle. Larisa Mikheeva, director of the social security services of the Vachsky district, told RIA Novosty that the 42-year-old cannot be forced into rehabilitation, and that so far she has refused all help, saying that she likes the way she lives now, and that it suits her.

“She is not disabled, she has no mental illness. She is an adult, she just lives with her mother and is used to this lifestyle,” Mikheeva said. “A person must voluntarily agree to receive some services. If they are not mentally unable to make decision, we cannot legally force them.”

Even though local authorities keep claiming that Nadezhda Bushueva does not suffer from mental issue, I would say that that is debatable, at least considering her situation for the lat two and a half decades, and the state she was in when she was found.

Larisa Mikheeva added that both social workers and neighbors offered to help Nadezhda at least clean her home before her mother returned from the hospital. They even showed up at her house with garbage bags and cleaning products, but she flat out refused.

“It is very difficult to help people when they are healthy according to documents, and to make them change their idea of ​​life if that person does not want to change anything,” the social worked said.

Nadezhda Bushueva’s shocking story was originally featured on Russian television show “By the Way” last week, and has since gone viral in the media.

Saxon is a prolific writer with passion for the unusual. I believe the bizarre world is always exciting so keeping you up to date with such stories is my pleasure
Previous Watch as Baby Elephant Pushes His Friend Into Water in Rare Prank (MUST WATCH)
Next Deer runs into Black Lives Matter protest in New Jersey, seriously injuring woman