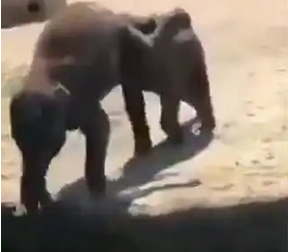 This might be one of the most hilarious videos you’ll be watching in a while. It already has twitter going up in a frenzy.

Baby elephants are arguably the cutest animals, so when a video features not one, but two baby elephants, you can be sure it’s on its way to becoming a viral hit. One such video was tweeted a couple of days ago by Indian Forest Service officer Susanta Nanda, and it is sure to bring a smile to your face.

The video shows one baby elephant pushing another into water in a prank that has left thousands in splits. Though it’s not a new video – it has been circulating on social media for at least two years – the antics of these baby elephants never get old.

Watch the literal embodiment of the hilarious “There can only be one” meme play out below:

Since being shared on the microblogging platform, the video has collected over 37,000 views and a ton of amused comments.

According to Nature World News, research has found that baby elephant have a teasing and playful side to them that is important for developing social and physical skills crucial for survival.

Saxon is a prolific writer with passion for the unusual. I believe the bizarre world is always exciting so keeping you up to date with such stories is my pleasure
Previous Man’s Bladder Explodes For Holding Pee in for 18 Hours After Drinking Excess Beer
Next Caring mum prevents healthy daughter from leaving their house for 26 years to protect her (Video)