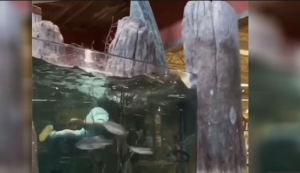 A Louisiana man seen in a viral video swimming inside an aquarium at a Bass Pro Shop store has been arrested, according to reports.

Kevin Wise, 26, of Slidell, was charged with simple criminal damage to property, a misdemeanor, the Bossier City Police Department said.

The suspect went in the tank in Bossier City as part of a TikTok stunt, KSLA-TV of Shreveport reported.

“I said that if I got 2,000 likes I would jump in the tank,” Wise said, according to the station. “I got way more than that and didn’t want to be a liar.”

The video, posted by Treasure McGraw, allegedly showed Wise swimming in the store’s fish tank, climbing out, and then fleeing the store, Shreveport’s KTAL-TV reported.

Wise was arrested after subsequently returning to the store, Bossier City police said.

The store determined that it would incur costs for emptying and cleaning the 13,000-gallon tank following the alleged stunt, prompting the filing of a complaint with the police, KTAL-TV reported.

WHAT IN THE WORLD IS GOING ON HERE:

A guy went for a swim in the Bass Pro Shop fish tank. He left behind his Coronavirus mask and his hat. This happened at the Louisiana Boardwalk located in Bossier City.#newsatitsbest pic.twitter.com/FA6bORB4oA

Saxon is a prolific writer with passion for the unusual. I believe the bizarre world is always exciting so keeping you up to date with such stories is my pleasure
Previous Deer runs into Black Lives Matter protest in New Jersey, seriously injuring woman
Next Enugu Police arrest woman, husband for driving 6 inches nail into 10-year-old maid’s skull and using hot iron on her (graphic photo)