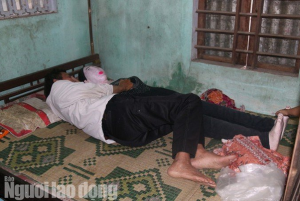 It might be true that love can drive a man to do anything for his wife. But does that include her corpse? Well, this is love story is more bizarre than romantic.

In 2009, the shocking story of a man who dug up the remains of his late wife, sealed them in a plaster sculpture and has been sleeping in the same bed with her for the last five years shook the internet.

Many thought the story was false as his way of grieving is quite unusual but fast forward to 2020 and the man identified as Le Van continues to sleep in the same bed with his wife’s remains.

The Vietnamese man has now been sharing the same bed with her for the last 16 years despite the opposition of relatives and fellow villagers.

He has made it clear he has no intentions to let go of his wife whom he married in 1975.

It is reported that the duo’s marriage was arranged by their parents and at the time they married, they hardly knew each other, let alone share romantic feelings. 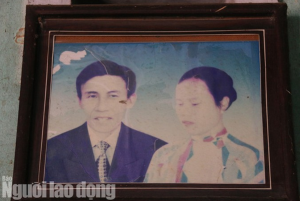 They got married shortly after Le Van got back from military service as their union was arranged from a young age.

Cupid blessed the couple as they soon fell in love and lived happily with the union producing seven children.

Le Van’s wife is said to have died suddenly in 2003 and upon hearing the news, the bereaved rushed home but barely got to see his spouse’s face for a few minutes before she was buried.

The grieving husband was so shocked by his wife’s death that he spent most of his time, night and day, at the cemetery. He was sleeping on his wife’s grave but after a few months, he started worrying about bad weather and rain.

To avoid the harsh weather conditions, he made the decision to dig a tunnel into her grave, so he could sleep next to her.

However, his concerned children found out about his sleeping place and stopped him from spending his nights at the cemetery. It was at this point that he decided to bring his wife’s home with him if he could no longer sleep next to her at the cemetery. 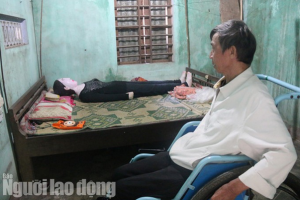 Unable to let go of his beloved, he dug up her bones and placed them in a bag near the cemetery. Then he started making a hollow statue in the shape of a woman, out of plaster, cement, glue and sand and put his wife’s remains inside.

Then he placed the hollow statue on the bed and laid next to it. He has been doing the same thing every night for the last 16 years.

His children were angry with his actions and demanded that he return their mother’s body to her final resting place, but he refused, saying he couldn’t go on without her.

Due to his actions, neighbours refused to visit his house for years and some the authorities were alerted.

He refused to budge and the police eventually gave up after repeatedly trying to convince him to rebury the body.

“The local authorities asked Van to bury his wife again and the man agreed. But some time later, local people continued to complain that Van still held the remains in the house. We have done all the way but with the conservative nature of Mr. Van, the incident has not been solved yet,”  Mr. Tran Trong Sanh, Chair of the town of Ha Lam, told VietnamNet in 2005.

According to Net News Vietnam, Le Van has been confined to a wheelchair for the last two years, but he still crawls in bed next to the statue containing his wife’s remains every night. He cleans it does its makeup every day, and changes its clothes every day, things that he never did when his wife was alive.

“When my wife was alive, she never wore a nice dress so now I have to make many nice clothes for her. I change clothes for her twice a day,” Le Van said. “People said I’m crazy because I take care of a corpse but I strongly believe that she is always with me. I’ll definitely sleep with her dead body until I die.”

You can watch a video of him sleeping next to the corpse below:

Saxon is a prolific writer with passion for the unusual. I believe the bizarre world is always exciting so keeping you up to date with such stories is my pleasure
Previous Enugu Police arrest woman, husband for driving 6 inches nail into 10-year-old maid’s skull and using hot iron on her (graphic photo)
Next See Indonesia’s silver painted beggars (video)