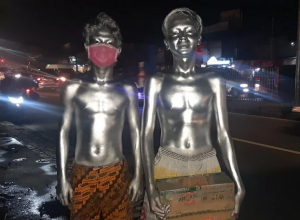 You may have seen several beggars before dressed in different clothing or having different skin complexions. Definitely not silver-coated beggars looking bizarre as they walk through the streets begging for alms. Well, they are everywhere in the streets of Indonesia. They are called Manusia Silver, or “Silver Men” and these are special types of beggars that have become a common sight on the streets of several Indonesian cities.

The so-called Silver Men are said to have been inspired by the street performers who used metallic paint to transform themselves into living statues and wow passers-by with their doll-like movements. The Silver Men or Manusia Silver, as they are called in Indonesian, simply adapted the look of these performers to their own skill – begging. 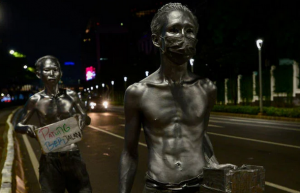 So how do these Silver Men get their colour? They simply spray-paint themselves with the metallic pigment, grab a cardboard box and walk among cars on busy roads, hoping that someone spares some change. For many, it’s like a job, one that puts food on the table.

Ever since Silver Men started showing up at busy street intersections in Jakarta and other big cities, about a year ago, they have been getting a lot of attention booth from the press and on social media, prompting many regular beggars to adopt the shiny, metallic look. However, their numbers have been soaring lately, and they have become a nuisance. According to recent articles in Indonesian press, police have been cracking down on Manusia Silver, arresting and fining them to discourage them from pestering people for money. 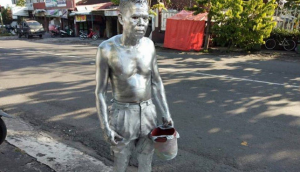 Silver Men recently got some bad publicity, when a video showing a silver-painted toddler running after cars and asking for money started doing the rounds online. Many people on social media felt this was too much for a child but this has not stopped the number of Silver Men from growing in the streets of big cities in Indonesia.

Saxon is a prolific writer with passion for the unusual. I believe the bizarre world is always exciting so keeping you up to date with such stories is my pleasure
Previous Shocking Video of Vietnamese Man Who Exhumed His Dead Wife’s Corpse and Has Been Sleeping Next To Her on His Bed For 16 Years
Next Students allegedly throw “Coronavirus parties” to see who gets infected first