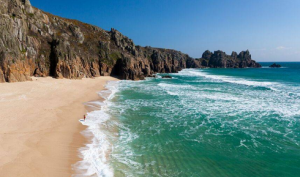 A 28-year-old British woman saved two sisters and a cousin from drowning in the water off a naturist beach in Cornwall — while topless, according to a report.

essica Layton, an actor and singer, told Cornwall Live: “I was topless in the sea when I saw two young women struggling to swim near rocks. Another member of the family ran in to help them and she started struggling, too.”

“I swam towards them and thought ‘oh s–t’ as I realized how strong the rip current was,” she continued. “I was struggling myself and they were panicking, which wasn’t ideal in a situation like that.”

She did all she could to save them in the water at Pedn Vounder, notorious for rip currents caused by incoming tides, regardless of the fact that she has no training as a lifeguard, according to Cornwall Live.

“I was going to tell them to float, which is the best thing you can do in a rip current, but they were panicking so much it wouldn’t have worked,” she explained. “They were all holding hands, so I grabbed one of their hands and pulled them all on to the beach.”

The family was very grateful for her service.

“It’s lucky I was there — it’s really weird thinking it happened, I can’t quite grasp it,” she added.

Since the heroic rescue, she has received praise — which also pokes fun at her lack of attire.

One of her friends said: “Not all heroes wear capes, some of them don’t even wear bikini tops.”

Saxon is a prolific writer with passion for the unusual. I believe the bizarre world is always exciting so keeping you up to date with such stories is my pleasure
Previous Students allegedly throw “Coronavirus parties” to see who gets infected first
Next Cat Steals Milk During Online Church Service In Hilarious (Video)