Home / Africa / Meet Owerri Rubber Man who has ‘no bones’, can twist his waist 360 degrees (video)

Meet Owerri Rubber Man who has ‘no bones’, can twist his waist 360 degrees (video) 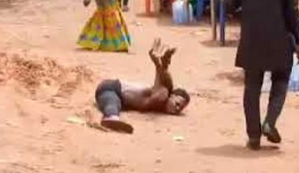 This man is called the Rubber Man. He is a popular entertainer based in Owerri, Imo State. This guy can twist his body as if he has no bones. We spotted him performing in an occasion in Imo state as he twisted his flexible body as if he was created without bones. The public cheered him on as he displayed rare talent which other countries would have capitalized on to see whether he could be trained by government as a gymnast. Unfortunately Nigeria seems not to have such time for talented people. Let’s hope private individuals will spot him one day and decide to train him as a proper gymnast, if that is where he will fit in.

Saxon is a prolific writer with passion for the unusual. I believe the bizarre world is always exciting so keeping you up to date with such stories is my pleasure
Previous Cat Steals Milk During Online Church Service In Hilarious (Video)
Next Deaconess arrested for allegedly subjecting her ward to extreme torture, inserting hot stick into her vagina before burning it with lighter and rubbing pepper in it (photos)