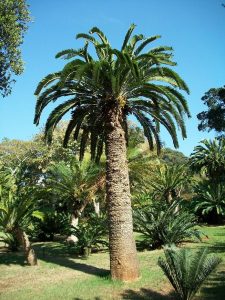 This story is definitely not about humans but its plot is as emotional as you would expect if it was about mammals. So a tree can be lonely? You may be asking this but going through this story might make you feel empathy for this tree.

The Royal Botanical Gardens at Kew, in the UK, are home to thousands of fascinating plants, but none as lonely as the Encephalartos woodii, an ancient cycad species and, most likely, the last one of its kind.

It was in 1895 that botanist John Medley Wood noticed this interesting-looking palm tree on a steep slope in Zululand, southern Africa. Intrigued by its multiple trunks and arched palm fronds, Dr. Wood — who made his living collecting rare plants – had some stems removed and sent to London in a box.It ended up in the Palm House at the Royal Botanical Gardens of Kew, where it has been waiting for a mate for over a century. Despite numerous efforts to find it a mate, the Encephalartos woodii at Kew remains alone, unable to produce an offspring and propagate its species. For this reason, many consider it the world’s loneliest plant.

Two hundred million years ago, when dinosaurs still roamed the world, cycads were everywhere. They made up around 20% of plants, acted as shelter for some dinosaur species and as sustenance for others. They managed to somehow survive five ice ages, adapted to coexists with new species of plants, but as time passed their numbers dwindled. Like all other cycads, Encephalartos woodii went from numbering millions of specimens, to thousands, and today, possibly just one, a male.

Some plants have both male and female organs, but not Encephalartos woodii. The one known specimen at the Royal Botanical Gardens of Kew is a male, and in order to reproduce it needs a female mate. Whenever it is ready to mate, this unique tree will produce a large, colorful cone full of pollen. It even signals its readiness by radiating heat or producing odors to attract pollinators. But that’s all it can do, without a female specimen to produce the seeds, it can never mate.

The Encephalartos woodii is technically not the last of its kind. It has been cloned several times, and its clones can be found in several botanical gardens around the world. It can even mate with some closely related species, but it can’t produce a true offspring. It just sits there, the last of its ancient species waiting for a female species to be found somewhere on Earth. Researchers have long been scouring the forests of Africa in search of a female Encephalartos woodii, but so far their efforts have been unsuccessful.

“Surely this is the most solitary organism in the world,” biologist Richard Fortey once wrote, “growing older, alone, and fated to have no successors. Nobody knows how long it will live.”

“Plant species can go extinct and there is one cycad here which is the only one specimen of its kind known,” Sir David Attenborough said at the opening of the Temperate House at the Royal Botanical Gardens. “It is a lonely plant, like the Galapagos tortoise. Human beings are taking over so much of the planet and the climate is changing so that areas where plants once grew they can’t grow anymore. There is nowhere else for them to go, except they can be kept here.”

Saxon is a prolific writer with passion for the unusual. I believe the bizarre world is always exciting so keeping you up to date with such stories is my pleasure
Previous Instagram model gets giant cheeks after injecting her face with fillers to look cute (see before and after photos)
Next This man has been keeping fit for 30 years by training like a monkey (watch viral video)