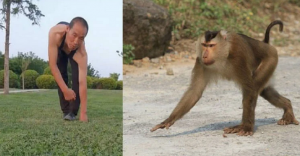 Many people have different ways of keeping fit but what this 50-year-old man Chinese man has been doing to keep fit for the past 30 years is really wacky.

He has been exercising by moving around on all fours and climbing trees like a monkey every day for the past three decades and he claims this has kept him very fit.

Chen Haigang is a fitness enthusiast from China’s Shanxi province. He attracts attention whenever he exercises in public and this is because of the bizarre routine he has been practicing for about 30 years.

He does not fancy the popular tai-chi practiced by many of his countrymen, jogging or simple stretching. What Chen prefers is to act like a monkey, walking on all fours, crouching his back and dangling his arms, and even imitating the primates’ tree-climbing techniques. He has been doing it for three decades now, ever since he was inspired by a monkey at the zoo, and claims that it’s been keeping him in perfect health ever since. This seems to be working for him as he looks as fit as he claimes

“I started doing this walking exercise when I was about twenty years old,” Chen Haigang told Pear Video. “I often watched the monkeys at the zoo. I thought it looked so fun and I started imitating.”

“[I used to have] little problems like a cold, toothache or tinnitus when I was a farmer working in the countryside. Since I moved to the city for work, I’ve spent my free time doing the [monkey] walking exercise. I can say this – I never need to see a doctor,” the 50-year-old added.

Chen originally started imitating a monkey’s walk, but then started climbing trees as a primate as well, swinging from branches, jumping from one to another, and he recently started other animals’ movements into his fitness routine, like the crawl of a crocodile.

The fitness enthusiasts told Pear Video that many people have come up to him to ask about the unique workout over the years, but most of them were too shy to do it in public, which is a shame as it’s “such a great sport”.

What matters is that this technique which seems bizarre to many people has been working for Chen, provided he doesn’t end up a monkey someday.

Vanko is a cheerful writer whose enthusiasm for unusual stories is inspiring.
Previous Encephalartos woodii, read heartbreaking story of the world’s loneliest plant
Next Meet Chen Haigang, man who trains like a monkey to keep fit