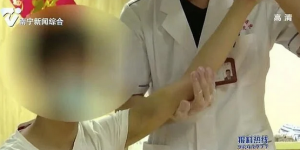 A 15-year-old Chinese boy identified only as Xiaobin has barely survived a stroke caused by excessive playing of video game.

The boy was rushed to a hospital back in March after passing out in his home in the city of Nannning. He reportedly suffered a stroke that left his left arm paralyzed, after spending the past month gaming and sleeping just two hours a night.

The boy had been confined to his home since February due to the Covid-19 pandemic lockdown in China. According to what his parents told doctors, Xiaobin had been spending most of his time in his room, under the pretext of taking online classes, but they later found out that he was in fact spending his days and most of his nights playing video games. According to medical experts at Jiangbin Hospital, that was the main cause of the boy’s unusual stroke, which left him with a paralyzed arm and hand.

“He shut the windows and locked the door. We had no idea what he was doing in there,” Xiaobin’s mother said. “I saw his online conversation with friends. He said he wasn’t well rested and was sleeping for at most two hours a day.”

After collapsing in his home, Xiaobin was rushed to the hospital where a CT scan revealed that he had suffered a stroke. Dr. Li, a brain specialist at the hospital, told reporters that the condition, highly unusual at such a young age, was most likely caused by the unhealthy lifestyle he had been leading for the past month.

“The main reason is that he had irregular sleeping and eating patterns because he wasn’t at school. The parents also tolerated his behaviors too much,” Dr. Li said. “A lack of nutrition and rest had led to a reduced amount of blood and oxygen in his brain and caused a cerebral stroke.”

Xiaobin has been undergoing rehabilitation treatment at Jiangbin Hospital since March, but doctors say it’s hard to say if he will ever make a full recovery, or even regain sensation in his left arm and hand.

Saxon is a prolific writer with passion for the unusual. I believe the bizarre world is always exciting so keeping you up to date with such stories is my pleasure
Previous Photographer Builds Camera-Shaped House, Names His Sons “Nikon, Canon And Epson”
Next Chinese Tourist Attraction Where You Can Fly Like Kung Fu Movie Stars (Video)