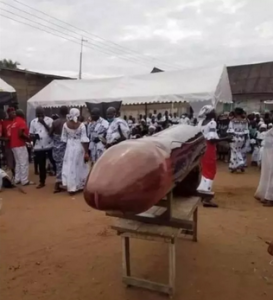 What looks like an innovative way of saying good bye to the dead has turned out controversial as the social media is asking questions about the decision of a family to bury their dead relative in a penis-shaped coffin.

Photos of the manhood-shaped coffin said to contain the remains of an unidentified lady went viral.

Reports have it that the incident took place in Ghana.

It was reported that the slay queen was not in good terms with the family and this led to their decision to bury her in a dick-shaped coffin, probably to let the world know the king of life she lived before she died.

Social media users are expressing worry that the family went to the extreme no matter what the dead lady did to them, that the dead should be given respect.

Vanko is a cheerful writer whose enthusiasm for unusual stories is inspiring.
Previous Image of “Jesus Christ” Discovered in Cut Tree Branch Shakes the Internet
Next Man’s p3nis breaks into two during s3x while trying to impress lover with high-energy moves (Graphic photos)