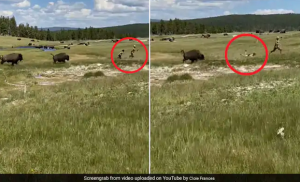 This is one of the scariest videos currently buzzing the internet. It involves a tourist and a wild animal called Bison. The tourist escaped by a hair’s breath. What happened will shock you.

A frightening video shows a woman tripping and falling while fleeing a pair of charging bison at USA’s Yellowstone National Park. The video, which was shared last week on YouTube, shows the bison standing together before they begin running after a couple of tourists. According to Fox News, guests at the national park are warned against getting too close to bison, which are wild and known to charge.

The tourists were filmed running for their lives when one of them loses her balance and falls to the ground. Her companion continues to run as other people, watching the hair-raising scene unfold from a distance, yell at the woman to “play dead”.

Unbelievably, one of the wild animals pulls back, while the other stops and just sniffs at the woman lying flat on the ground. After several seconds, during which time the woman continues playing dead, and bystanders continue to shout in terror, the bison runs away. After that, the woman calmly gets up and walks away with the person she was running away, appearing to be completely uninjured.

Since being shared on YouTube, the video has collected a whopping 1.5 million views.

The video was also sent to MTN News by Cloie Musumecci.

According to MTN News, Cloie said in an email that the incident happened at Nez Perce Creek. She said the woman “is a Montana local so she knew to play dead in that situation.”

She added that the woman managed to escape without a scratch.

“Bison have injured more people in Yellowstone than any other animal,” the National Park Service writes on its website, advising tourists to maintain a distance of at least 23 meters from animals like bison and elk.

Vanko is a cheerful writer whose enthusiasm for unusual stories is inspiring.
Previous Meet Vidyut Jammwal, the Only Indian On List Of “10 People You Don’t Want To Mess With”
Next Isa Funtua: What Buhari’s ally told me three hours before death – Ben Bruce