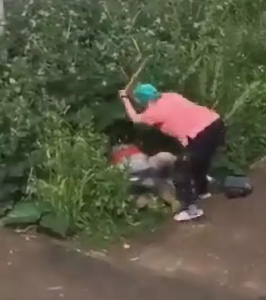 A video showing a furious woman smacking the bare bums of a frisky couple with a plank of wood after catching them having sex in a bush, has gone viral.

The unusual incident was filmed in the city of Stavropol in the south-western Russia by a neighbour in a nearby block of flats.

Eyewitnesses reports say that the outraged woman – who locals know as Lady Irina – spotted the couple getting amorous in the bushes and grabbed a short plank of wood in order to teach them a lesson.

In the video, two pairs of legs are seen poking out the bottom of a bush next to a pavement as Lady Irina approaches, armed with her paddle. 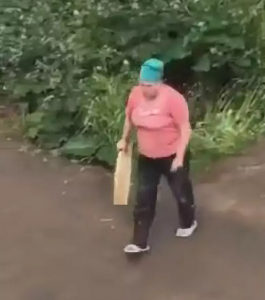 While the man is still thrusting, the outraged woman smacks him on the backside with the plank and shouts at the pair. She then wallops the woman’s thigh before continuing to berate them.

Before marching off with a scowl across her face, Lady Irina gives the couple a final whack with the plank which causes the man to yell out in pain.

The filming neighbour is heard laughing as she walks away.

Family psychologist Natalya Panfilova explained: “The woman’s reaction is clear, she is outraged by the situation so she grabbed the first thing at hand and spanked the couple like they were small children. It is possibly her reaction was caused by an ‘old school’ attitude.”

One person commented on the video saying the lady did the right thing, with another agreeing, saying: “I think she acted appropriately.”

However, a third wrote: “This old lady perfectly demonstrated the demographic crisis in the country.”

While explaining why people opt to have sex outdoors, Dr Paul Dobransky, a psychiatrist and author of The Secret Psychology of How We Fall in Love, had said that that the love for risky sex has something to do with the interconnection between ‘danger’ and ‘arousal’.

“They’re two sides of the same coin, but the brain doesn’t always know the difference and can easily confuse the two.”

So there we have it. Better keep one eye in the back of your head though.

Saxon is a prolific writer with passion for the unusual. I believe the bizarre world is always exciting so keeping you up to date with such stories is my pleasure
Previous Teenager nicknamed ‘Virgin Mary’ after she got pregnant despite not having sex
Next Company Wants To Pay Someone $10,000 Just To Poo