People have various ways of wishing a deceased family member last good bye but standing the person’s corpse and having a final pose for the press is really a wacky way of doing that.

Photos of family members taking pictures with their deceased relation have surfaced online.

The deceased identified as Nkanele was reported to have passed on about four months ago and has been in the Mortuary since then, prior to his burial. However, in a bid to make more memories of him on his burial day, the family members dressed the deceased in his Knight attire, made the corpse take a standing position – a feat, still not certain how they achieved it, and then they took pictures with it.

The photos have generated mixed reactions on social media. 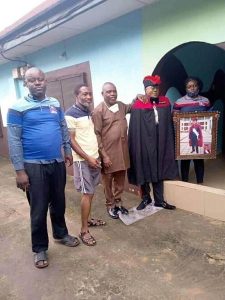 While some people find it disturbing, others have said having one final photo shoot wasn’t a bad idea as the family’s way of sending him to his final resting place. 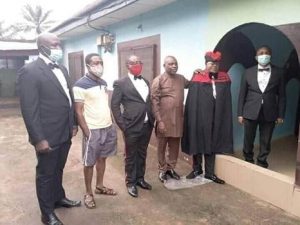 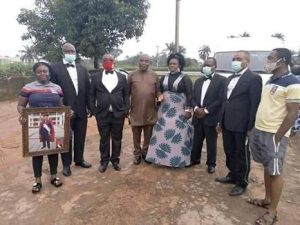 Saxon is a prolific writer with passion for the unusual. I believe the bizarre world is always exciting so keeping you up to date with such stories is my pleasure
Previous Watch as By-Standers Catch Two Brothers Who Jumped 40 Feet From Burning Building (video)
Next British couple win battle to name child Lucifer