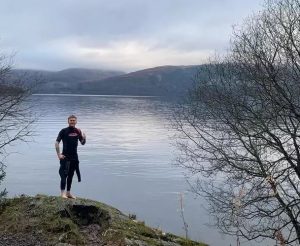 People take risks to prove points or set records but when it involves jumping from a height of 200 feet then the point must be a wacky one.

An ex-paratrooper is hoping to break a world record by jumping out of a helicopter from 200 feet into the sea without a parachute.

John Bream, from Hampshire, plans to make this move because he wants the record for the highest free jump from a helicopter and highest jump in to water. He intends to make this attempt into The Solent in September.

The 34-year-old, who has been nicknamed ‘The Flying Fish’ reckons that at the quickest he’ll be falling into the sea at 80 miles per hour. 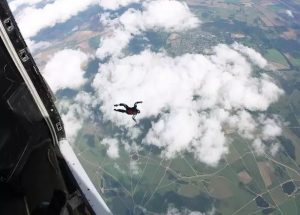 He said: “It’s quite exciting, I am confident in my ability, it’s all down to the training and my training is going really well, my confidence is at a high.

Those precautions include two safety divers and a boat sitting down below him in order to make sure that he lands safely and gets out as quickly as possible after his effort.

Bream continued: “I will be taken up in a Hughes 500 helicopter. I anticipate dropping through the air for around four seconds, hitting the water roughly 80mph and submerging to about six to eight metres’ depth.

“My knees and ankles will be braced and there will be a pump on a boat below to break the surface tension of the water.”

Bream is doing this for a reason. He is trying to raise funds and awareness for services mental health charity All Call Signs and Support Our Paras.

He explained: “I am a former member of the Parachute Regiment and served with them around the globe in peacetime and war fighting.

“Having served with some of the finest people, hearing about veteran suicide and knowing good people that have sadly taken their own lives is so painful.

“The transition from the military is difficult but I want to show that we don’t need to live in the past and we all can still achieve brilliance.”

Currently, the record which Bream plans to break is 191 feet, which is presently being held by extreme athlete Laso Schaller at Cascata del Salto, achieved in Switzerland back in 2015.

Bream will be hoping to better than in September, and you can support his efforts on his GoFundMe page.

Very scary plan but it seems Bream is determined to go ahead.

Saxon is a prolific writer with passion for the unusual. I believe the bizarre world is always exciting so keeping you up to date with such stories is my pleasure
Previous Shocker! Baboons With Knives Spotted Roaming Around Park
Next A Lion And Lioness Fight In Incredible Video From Forest