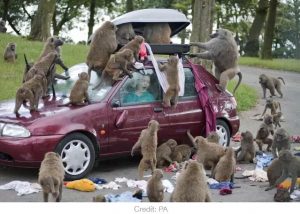 Funs lovers at an animal safari park in England may not find anything funny about this news at all – Baboons armed to the teeth with knives and screwdrivers reportedly spotted strolling around the park.

A vigilant worker Knowsley Safari Park spotted the troop of monkeys carrying tools about with them and alerted authorities.

The keepers at the park are worried that the baboons might have been armed by visitors ‘for a laugh’ in the hope that they’ll start damaging other people’s cars whilst they are going through the drive-through safari enclosure.

Monkeys at Knowsley Safari Park and such other parks are known to wreck things once they get the opportunity. 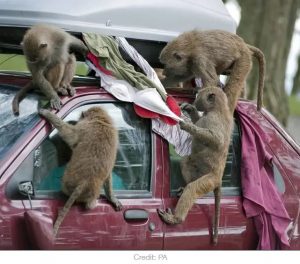 Other people have speculated that the monkeys have simply made off with the tools after nicking them from the toolboxes of workmen who have been into their enclosure.

A mechanic from Sale told The Sunday Times: “I’ve had two customers this year who became victims of those baboons.

“The kids start chirping up saying they want monkeys all over the car, and the next thing you know, you’re driving home with no registration plate.”

A worker from the park who is unnamed – said: “The baboons have been found with knives and screwdrivers. I do wonder if it’s some of the guests handing them out.”

However, there’s a good chance that this whole thing is just a product of people telling tall tales about the park.

It has been reported that the troop of baboons has managed to grab things like chainsaws, but that’s almost certainly a load of old nonsense.

A spokesperson for Knowsley Safari Park said: “We believe many of these stories have grown in exaggeration as they’ve been retold, with embellishment to make the objects that are sometimes found in the enclosure seem more exciting and unbelievable.”

Saxon is a prolific writer with passion for the unusual. I believe the bizarre world is always exciting so keeping you up to date with such stories is my pleasure
Previous Indonesian Woman Allegedly Gives Birth After Being Pregnant For Just One Hour
Next Man Plans To Jump 200 Feet From Helicopter Without A Parachute To Prove A Point