A Lion And Lioness Fight In Incredible Video From Forest 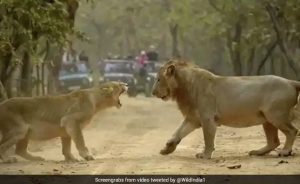 A viral video is currently buzzing the internet as it shows a lion and a lioness getting aggressive at each other over undisclosed dispute. Some social media users are already insinuating it must be a family quarrel over minor domestic issue. Lol!

A jaw-dropping fight between a lion and a lioness was captured on camera in the Gir Forest of Gujarat, India.

The captivating incident was filmed by politician and wildlife photographer Zubin Ashara. The video shows three vehicles full of tourists watching the big cats fight it out in the middle of a mud road.

NDTV reports that the undated clip was shared on Twitter by a page dedicated to wildlife photos and videos, called Wild India.

The 22-second clip shows the lion and the lioness roaring aggressively at each other – with the lioness even managing to swipe her paw across the lion’s face at one point. According to Wild India, it was recorded at the Gir National Park in Gujarat, which is the last abode of the Asiatic lion in the world.

Watch the fight below:

Since being posted just a day ago, the video has gone viral with over 2.6 lakh views and a ton of amazed comments. It has also prompted a number of jokes on ‘marital problems’ between the two big cats.

Last month, Prime Minister Narendra Modi announced on social media that the population of Asiatic lions in the Gir forest had increased, and so had their distribution area.

Saxon is a prolific writer with passion for the unusual. I believe the bizarre world is always exciting so keeping you up to date with such stories is my pleasure
Previous Man Plans To Jump 200 Feet From Helicopter Without A Parachute To Prove A Point
Next Nigerian woman chained to a pillar for 18 hours by her husband is rescued by welder 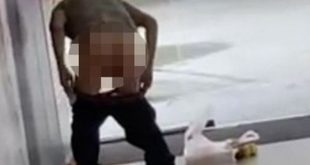