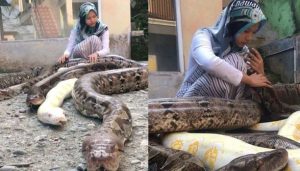 She has had these pets for about 10 years now so she is actually growing up with them. Her younger brother also freely plays with these but I’m quite sure this is not the usual pet story you’ll be expecting to read. Well, guess what? This kid has six giant, and I must add, scary snakes, as her ‘lovely’ pets and one of them is an albino python. This teenager has become an internet sensation just about three months after she began to share stories of where she is playing with these pets on social media platforms. Here’s the story; 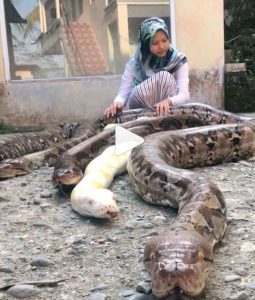 A 14-year-old Indonesian girl, Chalwa Ismah Kamal, has been buzzing the social media for uploading videos of her unusual pets – six giant pythons – that she loves to pet and cuddle. The videos show her playing and caring for her giant snake pets.

The sight of a full-grown python will make many people run for their life but not for this girl. Even when the snakes look like they could swallow an adult human with ease, Chalwa is not scared of her snake pets at all.

The teenager, who reportedly hails from Purworejo, Central Java, shares her home with six massive pythons and appears to have no concern for her safety when she’s around them. Photos and videos of the Indonesian girl playing, bathing and cuddling with the giant reptiles have been going viral on TikTok and Instagram, and leaving viewers with their mouths wide open.

There is no story yet explaining who Chalwa is and how she came to live with the six pythons, but she allegedly told Indonesian website Lampung77 that she has been taking care of her pet snakes since she was only 4 and feels no fear whatsoever when she is around them.

Although people regularly express their concerns for Chalwa’s safety in the thousands of comments she gets on her videos, the girl does her best to explain that her pets are not poisonous, that they are tame and that snakes in general are victims of negative stereotypes.

Chalwa is not the only one who feels completely comfortable surrounded by massive pythons; her younger brother appears in some of the viral videos as well, and he looks just as carefree.

Chalwa Ismah Kamal only started uploading snake videos to Instagram late last month, but judging by the response she has been getting in such a short amount of time, she’ll probably be doing it for a long time.

https://www.instagram.com/p/CCYWuZ9JZO5/?utm_source=ig_embedI’m not sure this is a kind of pet many people will consider getting for their kids as gifts for may be doing well at school or birth days; or even for whatever reason. But Chalwa seems to love her pets and her younger brother has no problem with such pets around. How the pets show love in return is yet to be revealed…for now.

Vanko is a cheerful writer whose enthusiasm for unusual stories is inspiring.
Previous Die-hard fans rent cranes to watch car race from outside arena during pandemic (video)
Next Highway passes through building after owners refused to sell property to government (Video)