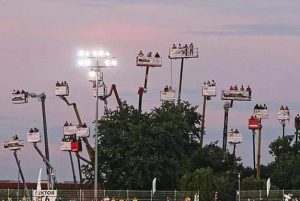 Some fans will stop at nothing to ensure they enjoy sporting events especially the one that involves teams they support. Many countries have not yet officially allowed fans to be physically present at venues of sporting events to watch their teams due to COVID-19 pandemic social distancing rules. So sports events actually take place in empty venues without fans.

But some diehard fans in Poland will stop at nothing to support their teams. This played out recently when dozens of die-hard car racing fans came up with an innovative idea of supporting their favorite drivers while also abiding social distancing rules. These fans rented 21 construction cranes and watched the race from above the race track arena. 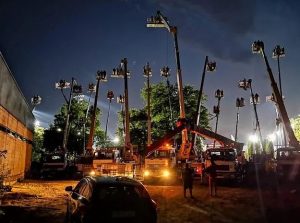 The car race event usually takes place on Sunday at Stadion Żużlowy Motor Lublin in the Polish city of Lublin, but only 25 percent capacity is allowed for fans in the arena according to the dictates of social distancing rules for sport venues in that country. Well, a few dozen fans have a smarter idea of keeping to the social distancing rules and still watching their favorite sport.

These fans came up with an idea of how to be close to the action without actually setting foot in the arena. They rented 21 construction cranes and lifted themselves up above the stadium in groups of three or four. Internet has been flooded with photos of these fans standing on platforms and holding flares. 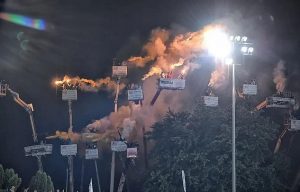 Polish sports news website WP Sportowe Fakty reports that at the start of this year’s national Speedway Extra League only three cranes were spotted outside the Stadion Żużlowy Motor Lublin, but then their numbers increased with every race, and now the man who came up with the idea of using cranes, one Artur Bieniaszewski, told the Polish publication that he is being flooded with requests by fans.

Would you do this for your team? Well, these polish fans think its not a bad idea at all.

Vanko is a cheerful writer whose enthusiasm for unusual stories is inspiring.
Previous Nigerian woman chained to a pillar for 18 hours by her husband is rescued by welder
Next 14-year-old girl who has six-giant pythons as pets (shocking video)