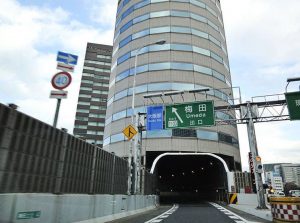 You could call this a gentleman’s agreement but the fact is that the owners of the land hosting the building didn’t want to sell their property so the Japanese government had to agree to run a highway through the building after years of legal battle without solution.

At the end of the day an architectural masterpiece came out of the dispute – a highway running through a building in the middle of the city of Osaka, Japan.

It is called the Gate Tower Building and it is one several other high-rise office buildings that make up Osaka’s impressive skyline. It is a unique building in the city because of the functional highway going right through it.

This is not a new project actually. It’s been around for about two decades and the social media have been awash with photos and videos of the 16-storey buildings.

The traffic doesn’t affect the people working inside it at all. The elevators are located on the side of the building, and the highway itself doesn’t touch the tower, which is properly insulated against traffic noise and vibrations anyway. This is really an architectural wonder which you should visit anytime you travel to Osaka. 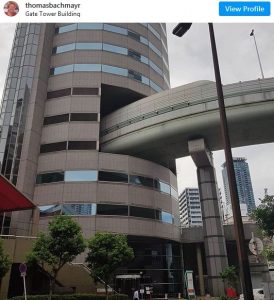 Here’s the history behind the Gate Tower Building. It was the result of a compromise in a 5-year-long land dispute. Property rights for this particular plot of land had been held by a wood and charcoal company since the Meiji period, but the buildings on it had deteriorated over time, due to gradual decline of the business. However, in 1983, when a redevelopment of the area was approved, the owners of the land were denied permits because the Japanese Government had already planned the Hanshin Expressway to pass through there. This was the beginning of a long and tedious legal battle.

The owners of the land refused to move from their land, so after five long years, to avoid delaying the Hanshin Expressway project any longer, authorities proposed an interesting compromise. The company would maintain ownership of the land, but would agree to have the highway pass through their property, reports Oddity Central. The highway off-ramp is essentially a tenant in the Gate Tower Building and is even listed as such on the list of tenants by floor. And as any good tenant, the highway, or rather its owner, pays rent.

Probably for safety purposes, the floors 5 through 7 are inaccessible by elevator. These elevators are actually taken by the unusual tenant, but anyone can go up to the 8th floor and watch the traffic pass through from above. The Gate Tower Building is currently the headquarters of the TKP Corporation. This means to go inside the building you would require permission from them, that is if you want to enjoy the sight from insight the building.

The first thing that might come to your mind is that working so close to busy highway traffic would be a nightmare for the office workers in the Gate Tower Building, especially those located on the 4th and 8th floors, but that’s apparently not the case at all. Because the highway never touches the building, and because of the excellent insulation work, the unique building is surprisingly quiet.

When you drive through the Gate Tower Building it is not as exciting as seeing the skyline view of the building with the high-way tunnel running through it.

Vanko is a cheerful writer whose enthusiasm for unusual stories is inspiring.
Previous 14-year-old girl who has six-giant pythons as pets (shocking video)
Next Man drags bank to court for forcing him to pay back loan he never took after his phone was stolen