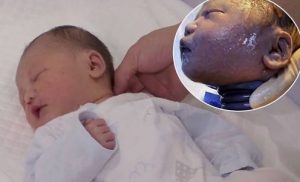 The internet was stunned when photos of a baby with its umbilical cord wrapped around its neck surfaced on various online platforms.

The incident which took place in China reportedly stunned doctors when the baby emerged with its umbilical cord wrapped tightly around its neck six times.

The amazing natural birth resulted in no consequences for mother or baby after the umbilical cord was removed.

The delivery took place at the Yichang Central Hospital in the city of Yichang in western China’s Hubei province.

Director of obstetrics Li Hua said: “I have been working for 23 years, and this is the first time I have seen in umbilical cord wrapped around a baby’s neck like this.” 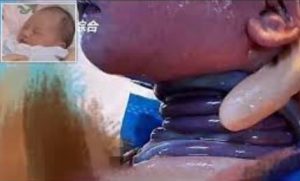 She added that after it was removed, the baby suffered no serious consequences.

She said: “To find the umbilical cord wrapped around the baby’s neck is not uncommon and if it’s long enough, will usually not cause problems.”

Medics said they had detected that the umbilical cord was wrapped around the baby’s neck but had not realised how many times and had been able to prepare for it thanks to the careful prenatal examination and constant monitoring during the mum’s pregnancy.

The mother, identified by her surname of Dai, thanked medics and said: “I’m glad that my baby has no problem.”

Saxon is a prolific writer with passion for the unusual. I believe the bizarre world is always exciting so keeping you up to date with such stories is my pleasure
Previous TV Star Contracts COVID-19 Taking Selfies With Fans
Next “I Was Terrified,” Says Woman Who Found Snake Slithering Up Toilet