Home / Uncategorized / Man Lights Up Hundreds of Candles To Propose To Girlfriend, Ends Up Burning Down Their Home

Man Lights Up Hundreds of Candles To Propose To Girlfriend, Ends Up Burning Down Their Home 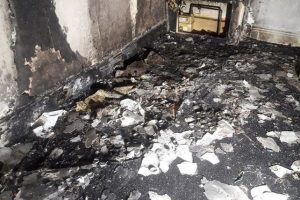 You may call it romantic tragedy but it began in love but ended in tears.

A man’s plan to impress his girlfriend with the most romantic proposal ended up in flames.

The man burned down the apartment he shared with his girlfriend while setting up for a proposal. The British man, who has not been named, was planning to propose to his girlfriend.

In order to achieve this, he lit hundreds of tea lights in their apartment, filled it with balloons and poured out wine in glasses.

The plan did not go exactly to plan. As he went to pick his partner up from right around the corner, the candles he had lit contributed to a fire that burned down their apartment.

According to South Yorkshire Fire & Rescue, as the man went “round the corner to collect his fiance-to-be, ready for the romantic moment, he came back to find the flat on fire and three fire engines on the way!”

The man probably forgot that he left the candles and tea lights unattended. They set his apartment on fire.

The fire department shared photos of the scene on Facebook, writing: “Look closely at these photos and you’ll see lots of burnt out tea lights. Hundreds of them.”

The photos have gone viral on social media, collecting hundreds of reactions.

Saxon is a prolific writer with passion for the unusual. I believe the bizarre world is always exciting so keeping you up to date with such stories is my pleasure
Previous Boy Goes Viral After Dancing Behind News Anchor During Live Broadcast (Hilarious Video)
Next Jaw-dropping video of two men floating down waterlogged street in Mumbai on make-shift raft