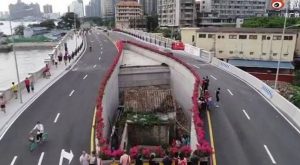 Sounds weird because this happened in China where most people from other parts of the world think such stubbornness would not be condoned at all by government. But a woman was able to stand her grounds though what she is left with now looks more or less like a pathetic tourist attraction.

It has to do with a newly opened highway in China’s Guangdong province which has gone viral online because it is constructed around the tiny home of an owner who probably preferred the risk of living inbetween two very busy bridges than move to a flat near a morgue.

There are several “nail houses” in China, a term used to refer to properties of homeowners who reject compensation from a developer for their demolition. The difference between most of the nail houses and this present one is that while most such examples are encountered within new residential complexes, this particular one stands in the middle of a highway bridge. 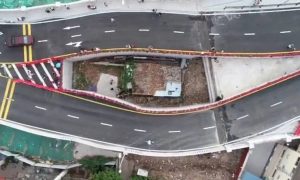 Footage released by Chinese media shows the property tightly squeezed between the lanes of the newly opened Haizhuyong Bridge, in the city of Guangzhou. It is located in a pit in the middle of the four-lane road bridge and has become somewhat of a local attraction.

Ms. Liang, the owner of the modest 40-square-metre, one-storey house told reporters that the Government failed to provide her with a replacement property in an ideal location, instead offering her a flat located near a morgue, which she just couldn’t accept. She is the only person out of a total of 47 homeowners and seven firms who still lives there. The others accepted the Government’s offers and moved away by last September.

“You think this environment is poor, but I feel it’s quiet, liberating, pleasant and comfortable,” Ms Liang said, adding that she doesn’t care what other people think of her stubbornness.

According to a report by Hong Kong-based news outlet South China Morning Post, the Government made Ms. Liang several offers, but she turned down all of them. One of the most generous ones included two other flats as well as monetary compensation of 1.3 million yuan ($186,500). She allegedly asked for four flats and 2 million yuan ($287,000).

After failing to reach an agreement with the homeowner, the Government reportedly had no choice but to alter the original project and build the bridge around the ‘nail house’. However, a spokesperson said that negotiations with the woman will continue. Meanwhile, this bizarre case has sparked a heated online debate, with most social media users accusing the woman of being greedy.

“Other owners have already moved, which suggests the compensation is acceptable. This house owner must think she can force the Government’s hand,” one person commented.

“A case of being too greedy and ending up with nothing,” someone else wrote.

Saxon is a prolific writer with passion for the unusual. I believe the bizarre world is always exciting so keeping you up to date with such stories is my pleasure
Previous Mother Single-Handedly Digs 35-Foot-Long Tunnel Near Prison of Help Convicted Son Escape (Video)
Next Watch Viral Vide of a Pack of Wolves vs a Mother Bear, See Who Came Out On Top