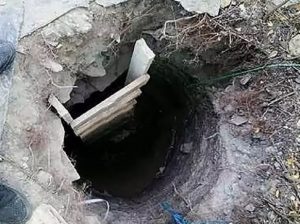 She would have won “Mom-of-the-year” award if not that she might be spending quite some time behind bars for what she did for her son. But the Internet seems to be impressed with this woman’s way of showing love for her son who was actually convicted of murder and is doing time in jail. Here’s the story.

A 51-year-old Ukrainian woman is currently in police net after it was discovered that she had been digging an underground tunnel near the walls of a prison, with the intention of helping her convicted son to escape.

The unnamed woman reportedly hails from the Ukrainian city of Nikolaev and had rented a house near the prison where her son was serving a life sentence for murder.

Reports have it that the woman every night this woman drove a silent electric scooter to an empty field near the Zaporizhia maximum security prison and used rudimentary tools to dig a 10-foot-deep tunnel toward the penal colony. She worked only during the night, using an improvised trolley to take the dirt out of the narrow tunnel.

It was reported that she had been digging the tunnel for at least three weeks and was almost getting to the prison walls when she was discovered and arrested.

The loving mother allegedly stayed inside the rented house during the day, and only came out at night, as to avoid attracting attention or later being identified by the locals. That part of her plan actually worked, as when showed pictures of the woman following her arrest, none of the neighbors recognized her. 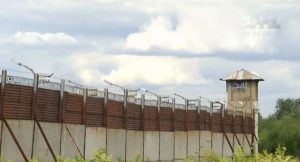 According to Ukrainian media, at the time of her arrest, the woman had managed to single-handedly dig a 35-foot-long tunnel at a depth of about 10 feet, which even police admitted was pretty impressive. She reportedly carried the dirt near an abandoned garage, close to where the dig site was located. During the three weeks of work, she managed to move three tons of soil.

There is yet no report on exactly how the woman was eventually caught, but local news sources reported that digging tools were also found inside the rented house and the mother admitted her guilt, adding that she was only trying to break out her son. She has been taking into custody and now risks spending time behind bars. Despite technically committing a crime, the daring woman’s actions have earned her praises from the Ukrainian public.

“This mother prepared thoroughly. Perhaps she is a miner’s daughter. To dig three meters deep would be hard enough. She had no excavator or anything of the kind,” local resident Serhey Pilnyansky told reporters.

“This is a real mother – not one of those who abandon their children,” another local said.

Sad to know she was doing this for her son serving time for murder.

Saxon is a prolific writer with passion for the unusual. I believe the bizarre world is always exciting so keeping you up to date with such stories is my pleasure
Previous Woman stuns Internet with extremely tiny waist (video)
Next Chinese City Builds Very Busy Highway Bridge Around Tiny House of Woman Who Refused to Move (Video)