Jaw-Dropping Video! Andhra Man Walks Up Behind Son, Hammers Him To Death 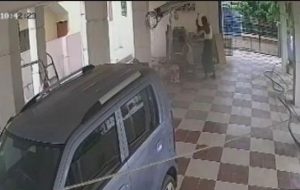 This chilling CCTV footage from a home in the coastal city of Visakhapatnam in Andhra Pradesh has emerged showing the horrendous moan a man used a hammer and almost in a premeditated manner hammered his 40-year-old son to death on Wednesday, August 12.

The man, identified as Veera Raju, subsequently surrendered to the police. He murdered his son allegedly over a property dispute.

The visuals from the verandah or the car-parking area of their home shows the father pacing the area as his son is seen sitting on a stool, his back to him. The man then stands behind the son and hits him on his head with a hammer.

The man continues to pace up and down the car-parking area as his son lies bleeding on the floor.

A heated argument is said to have broken out between the man and his son over property.

Both Veera Raju and his son were seamen. While the father retired from the merchant navy, the son had returned home about a week ago.

“Veera Raju killed his son Jalaraju after a heated argument took place between them over a property dispute. Veera Raju attacked his son with a hammer and murdered him on the spot,” a Visakhapatnam West police officer said.

Vanko is a cheerful writer whose enthusiasm for unusual stories is inspiring.
Previous Adorable Viral Video of Indian Boy Singing National Anthem, You’ll Love This!
Next Mum Buys Gate To Keep Baby Out of Kitchen, It Doesn’t Go As Planned (Viral Video)