Mum Buys Gate To Keep Baby Out of Kitchen, It Doesn’t Go As Planned (Viral Video) 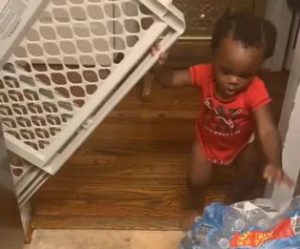 A woman’s plan to keep her baby out of the kitchen didn’t work at all. Seems the bay was a bit smarter than the plan.

It is common to for many parents to purchase safety gates a way of keeping their babies and toddlers away from stairs or other potentially dangerous places in the house.

Maryland resident Janael Palmer recently bought one to keep her one-year-old out of the kitchen, where he would take snacks and throw veggies around, as children do. Turns out, however, that this flimsy gate was no match for the determined toddler, who simply lifted it up to enter the kitchen, cool as a cucumber.

Janael Palmer shared the hilarious video on Facebook two days ago, where it has left thousands amused. “Purchased a gate to keep my one year old out of the kitchen from taking snacks and throwing my veggies around the kitchen. Well guess what the joke was on me,” she wrote.

I cannot make this kind of things up, this is exactly the kind of laughs that my day consists of and I need the extra energy to keep up.

Please excuse the the mess, but I had to share.

Purchased a gate to keep my one year old out of the kitchen from taking snacks and throwing my veggies around the kitchen. Well guess what the joke was on me.

When your life is set up like this, you gotta stay ready.
Get your NutraBurst and NRG on deck and you’ll always be ready.
“For licensing and usage, please contact licensing@collabcreators.com”.

The video has collected 18,000 ‘shares’ and more than 3,000 amused comments since being posted on Facebook. It was also shared on Twitter, where it has again gone viral and left thousands in splits.

The clip has collected 9 lakh views on the microblogging platform, where many were left laughing at the baby.

“This is a very bright child and he is also well mannered. I love how he made sure the drawer was all the way closed and the gate was let all the way down both times. Then he threw the apple sauce over the gate because holding it while lifting it would be too much work,” wrote one Twitter user.

“Gate Baby for President 2070,” another quipped.

Vanko is a cheerful writer whose enthusiasm for unusual stories is inspiring.
Previous Jaw-Dropping Video! Andhra Man Walks Up Behind Son, Hammers Him To Death
Next Angry Bull Chases Firefighters Battling Wildfire In Unbelievable Video