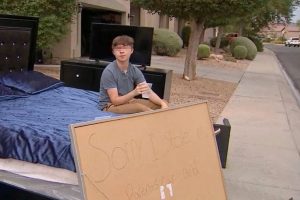 Parents have different ways of punishing their kids for wrong doing but what this particular family did as a form of punishment to their son has gone viral for very hilarious reasons.

A family from Phoenix, Arizona decided to punish their 14-year-old son after he was caught by police speeding in the family car. What they did was to make him give away all his possessions.

The boy, Angel Martinez, had taken off in their car to catch quick fun when his parents were away in Las Vegas celebrating their anniversary earlier this month. While there his parents received a call from police that their teenage son had taken the family’s Range Rover out for a spin and had disrupted the neighbors. 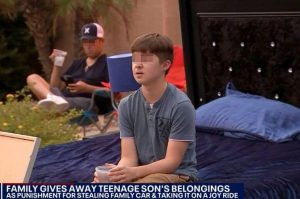 The unhappy couple decided to leave off whatever they doing to return home and discipline their son. They had to cut their anniversary celebration short and go home. They pretty much emptied the boy’s room, put all his stuff in the driveway and made him give it all away personally as punishment.

“I just wanted to drive but I don’t have a license so I just took it,” Angel told Fox 10. “I can wash the car, and I was like I don’t have anything to dry it, so I’m gonna take it for one spin until it dries.”

This was not the first time Angel got in trouble in the past few months, so his parents decided this time he had to pay for his wrongdoing somehow. They took out everything in his room, including the furniture set, the TV and his clothes, and put it right in the driveway in front of the house.

His parents didn’t just ask him to sit on the bed and give away his belongings, they also gave him a sign with hilarious content that read “Sorry I stole my parent’s car and was speeding”.

“We got back to the house. Today, his room is 100% empty, and we’re giving all his stuff away,” Angel’s father, Ramon, confirmed. “Mostly to apologize. We’re neighbors as well. He could’ve run someone over. Something really bad could’ve happened.”

This means that having giving out everything in his room, Angel will have no other option than to be sleeping either on the floor or on the living room couch for the time being. He sure didn’t find this pleasing at all and claims that he has learned his lesson. Probably he won’t be involved in such acts again.

What comes to mind now is whether Angel’s parents didn’t also punish themselves by extension since they’ll have to cough out money to replace their son’s property at some point.

Saxon is a prolific writer with passion for the unusual. I believe the bizarre world is always exciting so keeping you up to date with such stories is my pleasure
Previous Struggling German Circus Survives by Selling Jars of Lion Poop, Here’s Why The Business is Thriving
Next Shocking video shows sheep frozen in place for hours due to ‘change in weather’