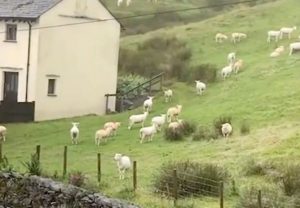 Certain kinds of animal behaviour are actually strange but when a herd of sheep stand frozen in one place for hours as if they’ve been hypnotized, the development looks more wacky than you can ever think of.

A young man was left stunned when he saw a herd of sheep stand frozen in a field as if they were hypnotised and recorded the incident on camera. The bizarre video has since gone viral.

He witnessed the unusual encounter as he and his family stayed at a holiday cottage in Troutbeck in the Lake District. 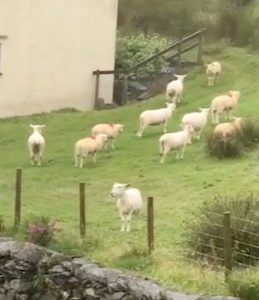 Rory says he received a text from his mum at 10am telling him to look at the sheep but didn’t think much of it until later.

It wasn’t until girlfriend Emily peered out the window an hour later and noticed the sheep weren’t moving at all.

“I was so spooked out that I just stood there and laughed in pure shock and proceeded to swear a lot.”

Hours later, they were still standing exactly the same way. 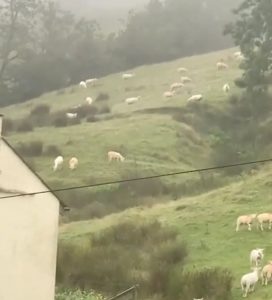 “From the moment my mum text me at 10am to the moment I left for the day 1pm, they were just frozen.

“It wasn’t until I came back later that day to find all the sheep were gone.”

“I live in the countryside as well and I have never seen anything like that before.”

It is not known exactly why the sheep behaved in this manner.

However, internet theorists believe that sheep will occasionally stand still when there is heavy rain and they become wet and cold.

Saxon is a prolific writer with passion for the unusual. I believe the bizarre world is always exciting so keeping you up to date with such stories is my pleasure
Previous Parents Force 14-Year-Old Boy to Give Away His Belongings As Punishment After Taking Family Car On Joyride (Video)
Next Japanese Province Where People Fall Asleep on Roads, The Reasons Will Stun You