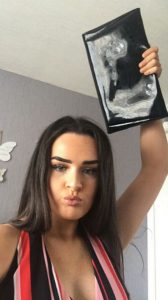 Some selfies might need brief explanations in order not to cause unnecessary embarrassments as was faced by an innocent UK student.

Siobhan Mulvey , 19, a student from Manchester, who posed for an innocent photo holding her new clutch bag above her head saw it cause chaos after her friends mistook it for a baby scan.

Siobhan took a selfie before heading out for a bottomless brunch to celebrate her sister’s 30th birthday, posing with her black New Look clutch, reports Mirror.

She shared it on Snapchat and Twitter with the unfortunate caption ‘Let’s get drunk’, without noticing the reflection from the window had changed the bag’s appearance. 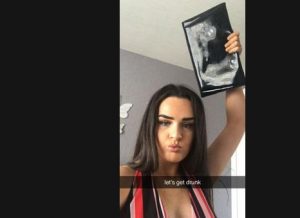 She was quickly inundated with messages from friends asking if she was announcing a pregnancy by holding what they thought was an ultrasound above her head.

The 19-year-old from Manchester was even forced to deleted the image from Twitter where cruel trolls accused her of “faking the pregnancy for attention” and slamming her for going drinking while ‘pregnant’.

Siobhan said: “I’ve actually chucked the bag out because of all the drama it gave me.

“Me and my family were going out for a bottomless brunch at Dirty Martini for my sister’s 30th.

“I posted it originally just before going out thinking it would just be my friends that saw it. I then put it on Twitter because I thought I looked pretty. I have quite a few followers and thought it would be nice. Then it just went completely weird.

“When people were thinking it was a baby scan it did make me giggle seeing as I put the caption ‘Let’s get drunk’.

“Some people genuinely thought I was announcing my pregnancy.

Saxon is a prolific writer with passion for the unusual. I believe the bizarre world is always exciting so keeping you up to date with such stories is my pleasure
Previous Amazing Video of Unintentional Collaboration On YouTube Involving Miles Davis Is Stunning the Internet
Next House that has prison with nine cells next to kitchen goes on sale (Photos)