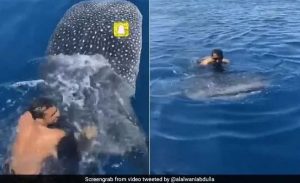 This looks brave but not many would want to associate with this form of bravery.

The internet is currently buzzing with a shocking footage showing a man jumping onto the back of a whale and riding the animal by holding its fin.

The video was captured near the port city of Yanbu in Saudi Arabia, reports the Daily Mail.

The unbelievable footage shows the man identified as Zaki Al-sabahy first sitting on a boat while targeting the whale sharks swimming past him.

As one of the whales sidles up to the boat, the man jumps off and lands on the animal’s back. Then, holding on to its dorsal fin, he rides into the Red Sea.

“Careful, it can swallow you,” one of Mr Al-sabahy’s friends was heard shouting in the video, according to Ladbible, while another friend cheered him on. The footage was later uploaded on Twitter, where it has divided opinions.

The video has collected 14,000 views on the microblogging platform, along with dozens of comments.

The video received mixed reactions from Twitter users as some praised the stunt while others criticised it as “reckless” and foolish.

Though scientists and conservationists discourage this act, the practice of riding whale sharks is not a new one. There are videos on the internet showing people riding these animals. Not everyone applauds such actions anyway.

According to NDTV, the National Geographic says that the whale shark is the world’s largest fish and can reach the length of 40 feet or more. Although massive, they also have a reputation of being docile – often allowing swimmers to hitch a ride on them, like this one did. Whale sharks are listed as ‘endangered’ on the International Union for Conservation of Nature’s Red List.

Saxon is a prolific writer with passion for the unusual. I believe the bizarre world is always exciting so keeping you up to date with such stories is my pleasure
Previous Watch Big Fight Between Snake And Mongoose Fight In The Middle Of A Road
Next Horrifying Video Shows Anaconda Trying To Swallow Alligator