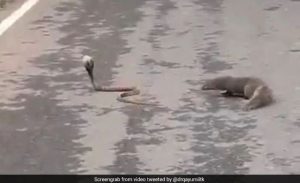 This fight was so interesting that commuters and motorists had to halt to watch as spectators.

A twitter user captures this dramatic video showing the moment a snake and a mongoose fought in the middle of a road, stopping traffic and forcing commuters to wait until nature took its course.

The video was shared on Twitter by Indian Forest Services officer Dr Abdul Qayum, who said he was happy that no “crusader” jumped in save to either species.

The mongoose is known for its ability to fight and kill venomous snakes, especially cobras. Their specialised acetylcholine receptors render them immune to venom, while their thick coats and quick speed also come in handy during conflicts.

The video shared by Dr Qayum shows the serpent trying to escape the determined mongoose – but in vain. The mammal manages to nab the reptile with its teeth even as it tries to escape down a hole by the side of the road. Meanwhile, a group of people was filmed waiting for the fight to conclude, parking their motorbikes and cycles on the road.

“This is absolutely natural. I am happy that no crusader jumped in to save either species. It’s the survival of fittest which prevails in nature,” wrote Dr Qayum while sharing the 29-second clip on Twitter.

This is absolutely natural. I am happy that no crusader jumped in to save either species. It’s the survival of fittest which prevails in #nature
Vid-WA. @IfsJagan @vivek4wild pic.twitter.com/RtsR5LosnI

Saxon is a prolific writer with passion for the unusual. I believe the bizarre world is always exciting so keeping you up to date with such stories is my pleasure
Previous House that has prison with nine cells next to kitchen goes on sale (Photos)
Next Shocking Video Captures Man Jumping On Whale, Riding Along By Holding Fin