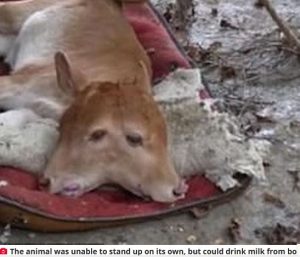 People are trouping to the village in droves just have a look at the weird creature. Even local farmers were stunned to see the animal.

Residents of a village in Dejiang County, Guizhou Province of China were shocked after a cow was born with two heads, two ears, two mouths and four eyes.

The incredible calf which was born with two heads has astonished people in its local neighbourhood in south-eastern China, reports Daily Star.

The calf’s mother gave birth to it last Saturday after a difficult seven-hour labour, according to their owner known as auntie Zhang. 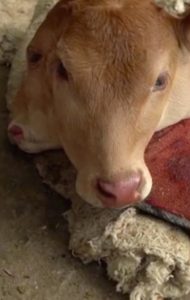 Auntie Zhang said the animal was unable to stand up on its own, but could drink milk from both mouths.

The woman said she was awestruck upon seeing the calf.

She told Chinese video news outlet Pear Video : “I am more than 70 years old, and I had never seen any cow like this in my life.”

The unusual calf has attracted the attention of many residents of the village, who flocked to auntie Zhang’s home to see it.

One neighbour told the reporter that she had come to see the animal because she could not believe the news.

“Now that I have seen it with my own eyes, I know it’s true,” she added.

An expert said that the two-headed cow shared the same throat and could grow four horns.

He claimed that the calf was healthy and hoped that it could keep growing.

It is believed the cow was affected by a genetic mutation while still inside its mother’s uterus.

The healthy female calf was delivered on a farm in Pondok Wuluh Village in East Java, Indonesia on Sunday night August 9.

Saxon is a prolific writer with passion for the unusual. I believe the bizarre world is always exciting so keeping you up to date with such stories is my pleasure
Previous Viral Video Shows Giant Alligator Stealing Golf Ball
Next Watch as baby goat with fractured limb struggles to survive in ‘pains’