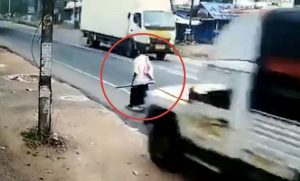 Some people have dubbed the pedestrian the luckiest man on earth while some others think the driver was way over any speed limit. The weird aspect is that the man was not even away that he would have been hit by a vehicle. Here’s this unbelievable story.

A viral video clip shows a man’s close encounter with a speeding vehicle in Kerala, India. The clip, which has left many on social media stunned, shows the vehicle zooming past the man, avoiding him by mere inches. It is being widely circulated on social media since it surfaced online a few days ago.

According to Twitter user @nisarpari, who shared the clip on Twitter two days ago, the incident took place in Kerala’s Kollam district and was recorded on CCTV cameras. In the 22-second clip, a man can be seen walking on the side of a road when a speeding vehicle comes up behind him.

The shows the vehicle lurching to avoid hitting the man, who was seen looking confused for a few seconds before turning back and walking in the opposite direction, probably realising that he had just had a narrow escape.

“Luckiest man of the month award goes to this man,” Twitter user Nisar wrote while sharing the video of the narrow escape. Here’s the footage:

Luckiest man of the month award goes to this man.

The video has garnered thousands of views on the microblogging platform, along with several comments. While some said the pedestrian was at fault, others blamed the speeding truck driver, leading to a heated debate in the comments section.

Saxon is a prolific writer with passion for the unusual. I believe the bizarre world is always exciting so keeping you up to date with such stories is my pleasure
Previous Watch as baby goat with fractured limb struggles to survive in ‘pains’
Next Watch as Forest Guards Rescue Two Huge Pythons Found By Farmers