Viral Video: 3-Year-Old Hailed A Hero For Saving His Friend From Drowning 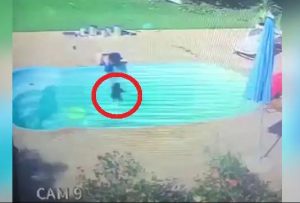 This act of bravery has excited the internet and the boy who saved his friend has received so many accolades from people who have seen the video.

A three-year-old in Brazil is winning accolades for saving his friend, also three, from drowning in a pool. Arthur de Oliveira did not display the slightest hesitation in reaching out to save his friend after he fell into a pool, reports the Daily Mail. A video shared by Arthur’s proud mother, Poliana Console de Oliveira, shows the moment that the three-year-old grabbed his friend’s hand and pulled him to safety.

The incident took place in Itaperuna in the state of Rio de Janeiro.

According to local news website G1, the son of a local caretaker, Henrique, made his way to the pool and fell into it while reaching for an inflatable pool toy. As he struggled to keep his head above water, his friend Arthur looked around for help. Then, not finding anyone, he grabbed his friend and pulled him out of the pool in a feat that has won him much praise on social media.

The whole incident was captured on surveillance cameras and the footage shared on Facebook by Arthur’s mother, who wrote: “It was 30 seconds of carelessness, the caretaker’s son left the house alone, without telling his mother… In my heart I just have gratitude for the life of Arthur’s friend and I am proud of my son’s courageous, quick and loving attitude.”

“My father was sitting on the porch, next to the pool, but it was so fast that he didn’t even see it,” Ms de Oliveira said to G1.

“When I arrived, Arthur said he saved his little friend. I told him ‘my son, you can’t, you have to call mommy’, and he said that if he called someone, his friend would die,” she said.

Not only did the three-year-old win praise for his bravery, he also received a a surprise visit from local police. The 29th Military Police Battalion visited Arthur with a basket of sweets and a new basketball. He was also awarded a certificate and a trophy that said, ‘From a hero to a hero.’

Saxon is a prolific writer with passion for the unusual. I believe the bizarre world is always exciting so keeping you up to date with such stories is my pleasure
Previous Aspiring teachers caught cheating with exam answers painted on nail
Next Woman’s Blocked Toilet Caused By Family Of Snakes Living Inside It