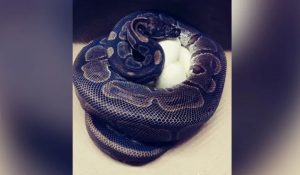 Zoo keepers always understand the zoo environment and the animals within very well but this particular incident has stunned them.

A ball python in a Missouri zoo has laid several eggs, puzzling zookeepers.

According to the St Louis Post-Dispatch, the 62-year-old female ball python at the St Louis Zoo has laid eggs despite not having been anywhere near a male in 15 years.

This incident is especially puzzling based on the fact that ball pythons usually begin laying eggs when they are four to six years old, and stop well before their 60s.

“She’d definitely be the oldest snake we know of in history,” to lay eggs, said Mark Wanner, a zoological manager of herpetology at the zoo.

In a Facebook post shared this week, the St Louis Zoo explained that ball pythons, native to central and western Africa, are known to reproduce sexually and asexually, which is called facultative parthenogenesis.

“Snakes are also known to store sperm for delayed fertilization. Now the question is, which of the two explanations is the reason for the eggs? Without genetic testing, Zoo staff won’t know if this ball python reproduced sexually or asexually,” the zoo wrote.

Their post has gone viral with over 4,000 ‘shares’ and hundreds of fascinated comments.

The ball python at St Louis Zoo does not have an official name. She came to live at the zoo in 1961. According to the Daily Mail, the snake laid seven eggs on July 23. Of these, three are in an incubator, the snakes inside two others did not survive and the last two were culled for genetic testing.

Saxon is a prolific writer with passion for the unusual. I believe the bizarre world is always exciting so keeping you up to date with such stories is my pleasure
Previous Man suffers serious bum damage after hotel toilet ‘shatters’ while he is on it, told to pay for damaged toilet
Next Angry Man Blows Up Kitchen While Trying To Kill Annoying Fly