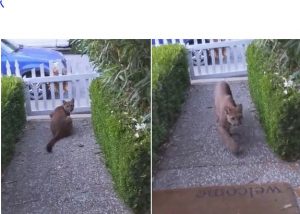 A California resident was stunned to see a mountain lion stalking children in his neighbourhood on Saturday, reports NDTV.

Timothy Kerrisk of Pacifica recorded a video of the big cat sitting near his front gate, watching children riding their bikes on the street, reports KRON4.

Mr. Kerrisk shared the video on YouTube, where it has gone viral with over a million views.

“I went outside to go look for my cat who had gotten out earlier and when I went outside I opened the door… I thought it was a German Shepherd at first, I was like ‘oh, somebody’s dog,'” Mr. Kerrisk said to ABC News.

He noticed that the mountain lion was looking intently at the children riding their bikes of off Mason Drive and tried to alert them.

“And so I started yelling for the kids to go back inside and that’s when the mountain lion turned around, saw me coming at like, and started coming at me and then jumped over the fence,” he said.

His video, uploaded to YouTube without audio, shows the hair-raising incident unfolding. Watch it below:

Since being posted earlier this week, the video has garnered over 1 million views and hundreds of comments.

According to Mr. Kerrisk, the mountain lion had earlier chased his cat through his yard. “My neighbor across the street has video of the same cat chasing my cat, my little cat, across the yard under the truck over the bushes and then down the hill, and it comes back five minutes later and that’s when he starts watching the kids,” he said to ABC News.

The neighbourhood is now being extra vigilant and keeping a close watch over their friends, family members and pets.

“There’s a lot of kids and pets naturally running around, and this cat seemed to be a little more comfortable than most mountain lions are,” said Mr. Kerrisk’s neighbour Andrew Mooney.

Saxon is a prolific writer with passion for the unusual. I believe the bizarre world is always exciting so keeping you up to date with such stories is my pleasure
Previous Naked Cleaning Services Where You Earn Up to £45 an Hour
Next Dogs Trained to Detect COVID-19 At Helsinki Airport