Home / Uncategorized / Building Partially Collapses With Woman and Her Kids Inside (Photos, Video)

Building Partially Collapses With Woman and Her Kids Inside (Photos, Video) 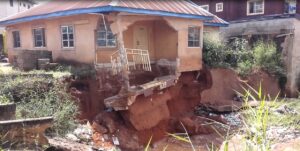 Mrs. Chinenye Ekeoma and two of her kids – Augusta, 7, and Chibuikem, 5, have just escaped death as part of their house collapsed in the middle of the night after heavy rainfall, yesterday, October, 6.

Mrs. Ekeoma’s husband is physically challenged. He lives in the building with them but he cannot do much to either park out or fix the erosion eating away their building.

Now the entire family is in danger of having their entire house collapse on them in the middle of the night.

Mrs. Ekeoma, her husband and their two children have been left with no choice but to abandon their home after heavy flooding affected the foundation of her house. 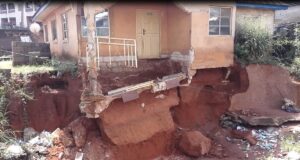 She has appeared in viral videos at different times begging Imo state government, to come to her rescue. By then some parts of the fence of the house, including the gates were still standing. Today, the gate of the house has collapsed with the entire frontal fence, including part of the main building.

She can no longer take the risk of staying in the house as people are urging her to pack out due to the fear that the building could collapse in the middle of the night.

Her husband is living with disability and is also helpless.

The woman has cried for days but help has not arrived yet. 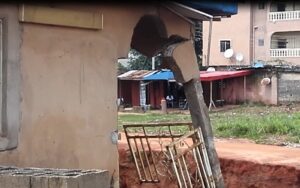 State government officials have visited the area and taken note of the destruction. But the woman and her kids are still in trouble.

The erosion was caused by road construction done by the administration of Rochas Okorocha. During that administration, several existing gutters and drainage structures were removed and replaced with poorly constructed ones which collapsed under heavy flooding. 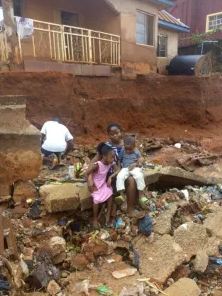 Unfortunately for the woman and her family, help did not arrive and now they were forced into the street by erosion and heavy flooding.

Saxon is a prolific writer with passion for the unusual. I believe the bizarre world is always exciting so keeping you up to date with such stories is my pleasure
Previous Watch incredible moment dog ‘catches’ owner during fall after night out
Next Massive Elephant Seal Found Wandering Around Coastal Town In Creepy Video