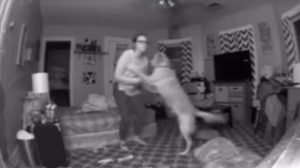 If you missed this you need to watch it now. It is one of the cutest videos you’ll be coming across today.

A pet camera caught the incredible moment a golden retriever stopped his owner from toppling over after a night out – and the clip has been viewed millions of times on social media.

Mirror reports that the device used by Hannah Quintus to keep an eye on her dog Jax when she’s out of the house was still filming as she was getting ready for bed when she returned home from having a few drinks.

As she throws the pillows onto the bed, she stumbles backwards and puts her hands out, triggering Jax to leap into action.

The two-and-a-half year old retriever jumps up and puts his front paws on Hannah’s shoulders to stop her falling and guides her back towards the bed, before pushing down on her shoulders to force her to sit down.

Hannah uploaded the clip to TikTok with the caption: “Came home after a few too many and caught this video on my petcam”, where it’s gained more than three million views.

She told the Daily Star : “When I watched it for the first time I was kind of surprised actually.

“It took me watching it a couple of times to realise what he was doing, then I was amazed.”

Hannah has had Jax since he was seven weeks old and says he has a naturally caring nature, with the dog loving hugs and always wanting to be touching somebody.

She says his good behaviour means he’s “the most spoiled dog” she’s ever met as he’s often rewarded with toys and food, including his favourite snacks of ice cream and cheese.

Saxon is a prolific writer with passion for the unusual. I believe the bizarre world is always exciting so keeping you up to date with such stories is my pleasure
Previous Huge Python Sets New Record In Florida
Next Building Partially Collapses With Woman and Her Kids Inside (Photos, Video)