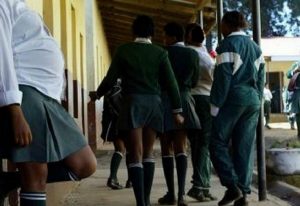 Not less than 415 school going girls dropped out of exam classes in Manicaland province during the Covid-19 lockdown period mainly due to marriage and pregnancy.

However, only five boys dropped out of school for marriage reasons in the province.

Provincial education director Edward Shumba said there was need to intensify guidance and counselling in schools in the province while urging parents to give their girl children a second chance.

“We all want to enhance guidance and counselling where these things are happening,” he told the media Friday.

“And for the parent, if the child has become pregnant, let those deliver, give them a second chance.

“The Ministry allows us to go for the second chance because, right, they could have made a mistake but who does not make a mistake. We all make mistakes and yes, we have learnt from our mistakes.

“Others learn from other people’s mistakes.”

Munyaradzi Rubaya, the provincial development officer in the Ministry of Women’s Affairs, said schools have to accommodate the girls to ensure their continued learning.

Rubaya said there was need to make the school environment accommodative to the returning girls.

“Since the education policy was amended to allow pregnant girls to continue attending schools, we are encouraging education institutions especially secondary schools to accommodate these girls and create an environment which is conducive for their continued learning, because in most cases, these girls are stigmatised,” he said.

According to the Primary and Secondary Education Ministry, in 2018, 12.5% of 57,500 school dropouts were due to pregnancy or marriage reasons countrywide.

In 2019, 7000 girls dropped out of school due to pregnancy countrywide.

Out of these dropouts, 367 were from primary school and 6,419 were from secondary school.

In August, parliament passed a legal amendment criminalising the expulsion of pregnant students.

Saxon is a prolific writer with passion for the unusual. I believe the bizarre world is always exciting so keeping you up to date with such stories is my pleasure
Previous Massive Elephant Seal Found Wandering Around Coastal Town In Creepy Video
Next 68-Year-Old Woman’s Steep Climb Up A Fort In Maharashtra Excites Twitter (Video)